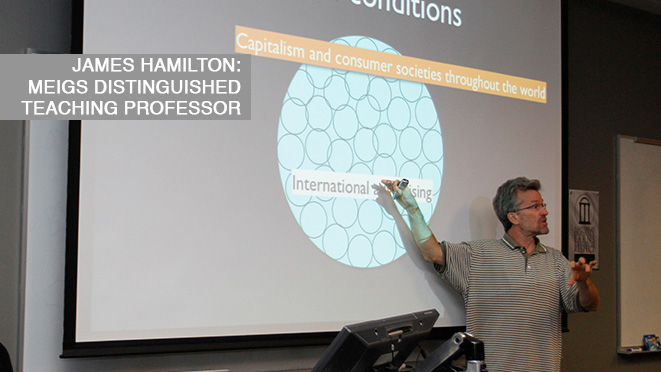 James Hamilton, associate professor of advertising at Grady College, is one of three professors named to receive the University of Georgia's highest teaching recognition, the Josiah Meigs Distinguished Teaching Professorship.

The Meigs Professorship, which is sponsored by the Office of the Senior Vice President for Academic Affairs and Provost, communicates UGA's commitment to excellence in teaching.

“The 2014 Meigs Professors demonstrate a dedication to excellence in instruction that is grounded in their commitment to the success of our students,” said Pamela Whitten, senior vice president for academic affairs and provost. “They represent the very best of what a University of Georgia education offers.”

“Professor Hamilton approaches every teaching task with joy and aplomb, and his contagious energy and enthusiasm for his craft make him a standout in a college full of excellent teachers,” commented Davis. “His presence in the classroom, and perhaps more importantly, in the hallways and in his faculty office, means so much to his students, generations of which sing his praises.”

“This is a special honor,” commented Hamilton on the recognition. “It validates all the gut-level choices I've made when deciding how to design and teach my courses, and choices I've stuck with to hone and develop even if they weren't entirely successful on the first try-ones that often were quite different from the typical. Given the amazing range of faculty who have been recognized in the past as Meigs professors, it is also an exceptional honor for me to be included in their ranks.”

Hamilton is one of four current faculty members at Grady College who have received the distinction. The others include David Hazinski, Lynne Sallot and Carolina Acosta-Alzuru.

The decision to leave Microsoft Corporation for a career in academia is clear indication of the passion driving James Hamilton to teach.

“As exciting as putting together a national campaign rollout under deadline can be, it doesn't hold a candle to having a student stick his head in my office to briefly share that his second exam score in my class was 20 points higher due to my help,” explains Hamilton, “or seeing my Ph.D. advisee in a dissertation defense confidently fielding tough questions on the fly for an hour from other faculty on her committee. These are only some of the special moments that make teaching so much more fulfilling.”

Hamilton delivers impressive instruction whether it is a 300-student introductory Principles of Advertising class, a 20-person Advertising Message Strategy course for majors, or the 10-person graduate theory seminar Mass Communication Theory II. He earns exceptional results by helping students become their own teachers.

“I strive to build students abilities so that they can become less dependent on the professor, and more reliant on and confident in themselves,” explains Hamilton, who was also the recipient of the Grady College Outstanding Teacher Award in 2011.

For as much passion as he delivers to his students in the classroom, his young mentees reflect praise right back.

“Dr. Hamilton expected the best from me from the first day of class,” wrote one of Hamilton's students regarding an International Communications class he took while at Grady@Oxford. “His desire to find out why things are the way they are not only made for interesting discussions and papers. It also changed the way I look at the world.”

“I have Dr. Hamilton to thank for a lot,” commented another alumnus. “Actually, `a lot' would probably be selling him short. It's likely closer to everything.”

In addition to his ability to “engage a crowd of 300 with ease and enthusiasm,” according to another student, Hamilton leads graduate seminars that are rigorous and effective.

“Hamilton has been for 14 years at the forefront of the current UGA strategic emphasis on building graduate programs of excellence,” said Tom Reichert, department head of the advertising. This is reflected in the fact that Hamilton is a two-time award winner of the Roland Page Award for Excellence in Graduate Teaching (2003 and 2009), and was the graduate advisor for the Dissertation of the Year as judged by three major scholarly organizations in the field, the only time that the same dissertation has won all three awards.

In addition to his classroom endeavors, Hamilton is also the co-author of the textbook Alternative Journalism, which has been noted by international scholars as “[a] work [that] will inform scholarly analysis of this burgeoning research field for years to come.”

His powerful effect on shaping thought processes is echoed time and again not only by his students, but by his peers and academic leaders alike.

“Dr. Hamilton not only teaches his students, he inspires them to think at a higher level than ever before, and he does so while challenging them,” wrote Charles Davis, dean of the Grady College in his nomination of Hamilton. “Rarely do I see such evidence of rigor matched by such evidence of appreciation. Students not only welcome Dr. Hamilton's challenge, they have come to expect it and relish it.”