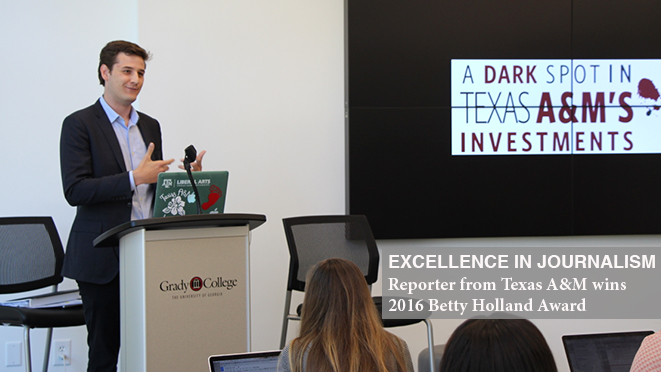 Spencer Davis, a reporter for The Battalion at Texas A&M University, is the 2015-16 winner of the University of Georgia’s Betty Gage Holland Award for excellence in college journalism.

The Holland Award recognizes campus journalists and their publications for distinguished service to honor and protect the integrity of public dialogue on America’s college campuses. The award is presented by the James M. Cox Jr. Institute for Journalism Innovation, Management and Leadership at the Grady College of Journalism and Mass Communication, and the Student Press Law Center (SPLC).

“Spencer Davis and The Battalion did an excellent job researching and reporting on questionable investments of public endowment funds managed by the University of Texas Investment Management Company,” said Cecil Bentley, assistant director of the Cox Institute. “Davis made good use of open records laws and data analysis to clearly explain what was at stake and why it mattered.”

Frank LoMonte, executive director of the SPLC, commended The Battalion for “its exhaustive research and its impactful packaging and presentation.”

“It can be intimidating for student journalists to examine their institutions' finances, but this was absolutely fearless work that challenged the power structure and did it in a factual, non-sensational way,” LoMonte said. “Their work should inspire college journalists everywhere to lift the lid on their secretive university foundations and ask the tough questions about where the public's money is going.”

According to Davis, the reports haven’t yet yielded policy changes. But he is proud of what they did accomplish.

“We created awareness of a new issue,” Davis said.  “We created public debate on campus about this.  I know, at least, that we’ve made an administration feel more scrutinized by what they’re doing.”

The annual award honors the late Betty Gage Holland, long-time friend of journalism education at Grady College.  It was presented during the 21st annual Management Seminar for College for College News Editors.

The Cox Institute for Journalism Innovation, Management and Leadership prepares students and professionals for leadership roles in the news media. It is named for the late James M. Cox Jr., who headed Cox Enterprises and Cox Broadcasting Corporation from 1957 until 1974.

The Student Press Law Center, an Arlington, Virginia-based nonprofit, provides legal assistance and advocacy in support of student journalists nationwide seeking access to information from schools and colleges. The Center provides free legal training and educational materials for student journalists and their teachers on a wide variety of legal topics.