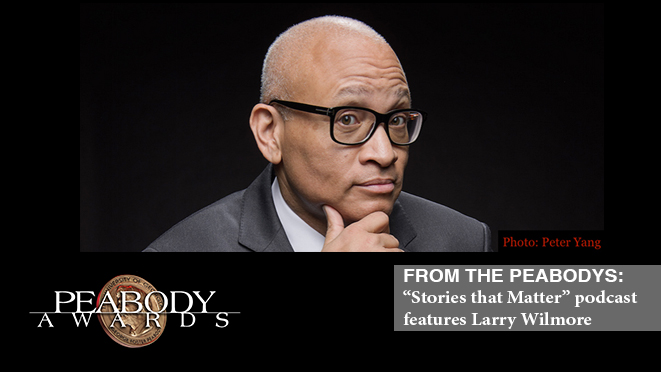 Grady College is the proud home of the Peabody Awards, scheduled this year on Sunday, May 31, 2015, in New York City. The summary, below, is for an interview conducted for the new podcast “Stories that Matter” produced by the Peabody Awards. It is reprinted with permission from www.PeabodyAwards.com.

After establishing himself on the national stage as senior black correspondent for “The Daily Show,” Wilmore’s next task will be to fill the slot that Stephen Colbert left on Comedy Central when he agreed to move to CBS to succeed David Letterman.

But Wilmore’s show is not going to just be about race, he said, and he was working in television long before sitting alongside Jon Stewart giving his commentary on America’s race relations.

One of his first jobs in the industry was writing sketches for the Fox comedy series “In Living Color” from 1991 to 1993. Throughout much of the decade, he also wrote for sitcoms like “The Fresh Prince of Bel-Air,” “Sister, Sister” and “The Jaime Foxx Show.” He went on to co-create “The PJs,” a claymation series on Fox depicting life in the inner city housing project. In 2001, he created the Peabody Award-winning “Bernie Mac Show” and would go on to work as a consulting producer for another Peabody winner, “The Office.”

To listen the podcast “Stories That Matter: Interview with Larry Wilmore,” or to read a complete transcript of the interview, please visit the Peabody Awards website.