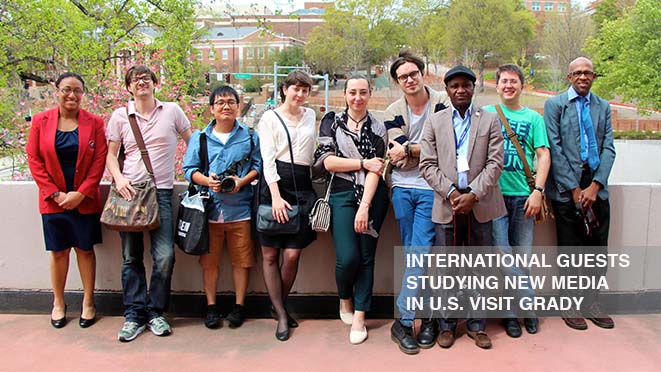 The guests are part of a larger group of about two dozen visitors participating in a three-week program called Media Literacy Promoting Civil Society Through New Media. It is organized by the International Visitor Leadership Program of the U.S. Department of State's Bureau of Educational and Cultural Affairs.

Participants included: Mirza Ajnadzic of Bosnia and Herzegovina, editor and chief of eFM Student Radio; Tharum Bun of Cambodia, a contributing writer for Global Voices Online; Edmond Doua of Cote d'Ivoire, a technical advisor in the Communicatons and Public Relations Department for the Ministry of Planning and Development; Janja Sesar of Croatia, project manager of Kurziv, a platform for cultural, media and social issues; Denis Scott Chabrol of Guyana, managing director and managing editor of Demerara Waves Media, Inc.; Denis Tokarskiy of Russia, director of Megapolis Publishing Company; Cigdem Tongal of Turkey, a research associate for the Istanbul Policy Center at Sabanci University; and Alberto Nardelli of the United Kingdom, co-founder of Tweetminster.

Lee Becker, director of the Cox Center, led a discussion of the role of new media in local government coverage. He spoke of the decline of funding for local news in the United States, noting that many journalism microbusiness owners depend on revenue from second jobs.

Becker advocated for an increase in citizen-led journalism, and pointed to his news blog, Oconee County Observations, as an example.

“The old model is broken and it's not going to get fixed,” he said. “We have to assume more responsibility ourselves. We as citizens have to say, `why don't we make it part of our hobby to [report]?' Maybe you can monetize it across time, but we have to go into it with the idea that our communities need more attention than they're going to be provided by the legacy media.” He added: “if we don't do this, democracy suffers.”

Following a tour of the building, the group then met briefly with Dean Charles Davis, who gave an overview of the College, its mission and its plans to stay on top of the changing media landscape. He noted that “all [U.S.] journalism schools are in the midst of pretty dramatic change.”

“Grady must signal to the world that we are digital centric,” he said.

The visit concluded with a discussion of journalism education in the U.S. with Tudor Vlad, associate director of the Cox Center. Citing enrollment and graduate surveys – detailed research conducted annually by the Cox Center – Vlad informed the group that journalism schools in the U.S. are heavily comprised of undergraduate students (92%). He also said that eight out of ten program directors reported their schools having undergone “major changes” in recent years, mostly in the areas of multimedia, social media and strategic communication.

“We all gain a lot because we come from different backgrounds,” participant Mirza Ajnadzic said of the trip, which spans from New York to Washington, D.C., to California. “It's a different society, a different cultural environment, a different environment in general, so not all of the stuff we can bring back with us and try to implement it, but if you listen very carefully, you can at least get a bit to fit because some of the tips are universal.”