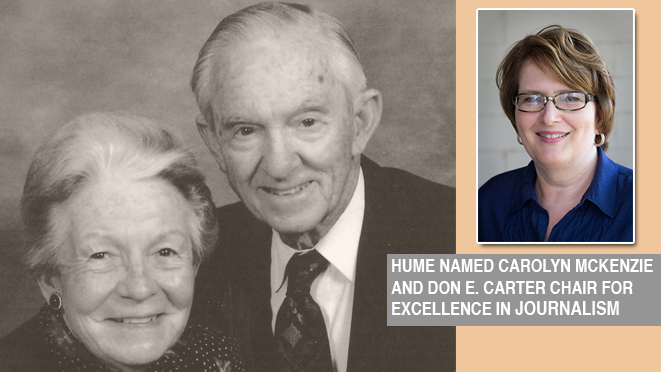 Janice Hume has been named the Carolyn McKenzie and Don E. Carter Chair for Excellence in Journalism at the University of Georgia’s Grady College of Journalism and Mass Communication.

Hume serves as the head of the Department of Journalism.

The purpose of the Carter Chair is to teach journalistic excellence to students entering the profession, emphasizing journalistic values of clarity, accuracy, fairness, balance and credibility—values that characterize the Carters’ professional careers. John Greenman previously held the chair until his retirement in 2015.

“Dr. Hume upholds the legacy of Don Carter, a journalist’s journalist,” said Charles Davis, dean of Grady College. “Her passion for journalism education embodies the values we seek to foster throughout the college, and we’re just so fortunate to have her leadership as a model for students today and tomorrow.”

Don Carter (ABJ ’38) began his career as the editor-in-chief at The Red & Black before working as a reporter and editor at multiple newspapers across the county, including positions in Atlanta, New York City, Washington, D.C., and Miami. He was the founding managing editor of The National Observer before serving as vice president for news at Knight-Ridder until his retirement in 1982.

“I am pleased—and I know Carolyn would be pleased—that Professor Hume holds the Carter Chair,” Carter said from him home in Sea Island, Georgia. “As Carter Chair and head of the Department of Journalism, she will be able to focus the resources of the chair and the Carter Endowment to advance journalism excellence as Carolyn and I envisioned.  It’s a good time for journalism at Grady.”

“I’m both thrilled and thankful to be named the Carter Chair,” Hume said. “Don Carter and his late wife Carolyn exemplify journalism excellence. What wonderful role models for aspiring journalists. My goal will be to instill in our students the Carters’ passion for responsible, ethical and courageous journalism—the kind of journalism that makes a difference in our communities and world.”

“I plan to use this chair to increase experiential opportunities for students and to help faculty with research projects designed to help sustain excellent journalism. We will recognize the best student journalists at Grady, and we will connect them with our industry friends and our amazing alumni to make sure Grady graduates are well prepared to lead in this fast-changing news environment.”

Hume joined Grady College in 2001. She teaches magazine writing, management, and media history. Her research focuses on American journalism history, public memory, and media coverage of death.  Hume received her Ph.D., master’s and bachelor of journalism degrees from the University of Missouri.  Prior to joining UGA, Hume spent twelve years as a newspaper reporter and features editor. She was lifestyle and arts editor at the Mobile Register (Ala.) and she served on the faculty of the A.Q. Miller School of Journalism and Mass Communication at Kansas State University. She has authored three books including “Popular Media and the American Revolution.”