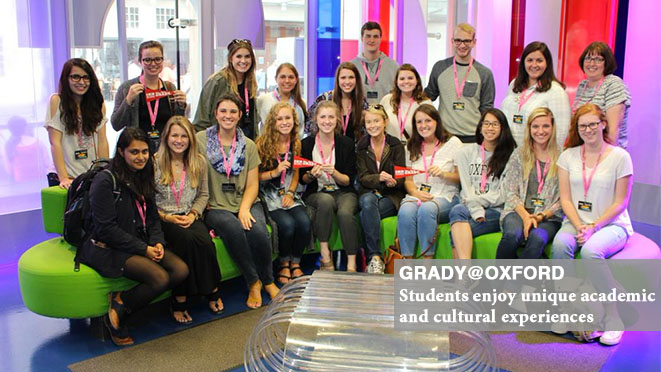 Summer 2015 was full of unique academic and cultural experiences for eighteen students enrolled in the Grady@Oxford study abroad program.

The program was comprised of two courses: one taught by Karen Russell, associate professor of public relations and Jim Kennedy New Media Professor at the Grady College, and the other, a choice from various classes led by Oxford faculty.

Russell said she designed her class, Social Effects of Mass Communication, to appeal to all Grady majors.

“The students were so motivated and inspired by their surroundings to do well,” said Russell. “We came in every day and sat around a big seminar table and talked about the assignment, and there were many times that I had to cut them off because we were out of time, not because they ran out of interesting things to say!”

“I really enjoyed doing a group presentation on the effects of media violence on society,” Stoenica said.  She added, “The biggest challenge was probably learning how to balance school with the excitement of being in Oxford and Europe as a whole. There’s so much to experience, but you can’t overwhelm yourself either. Know when to go have fun and when to stay in the library.”

Senior journalism major Adhiti Bandlamudi also enjoyed both the academic and cultural components of the program.

“It was a very different academic atmosphere than at UGA, in that at UGA, there is a defined distinction between the professor and the student, while at Oxford the professor is considered your colleague, who is incredibly interested in what you have to say and what you can bring to the discussion,” said Bandlamudi.

“Culturally, I loved how significant the entire town was,” Bandlamudi continued. “No matter where you went, you could find a place where someone famous — be it an actor, writer, or politician — had been. It almost inspires you to do something great, too!”

Among highlights of the program were two excursions to London. During the first trip, students explored the British Library and visited the Guardian newspaper, where they had a Q&A session with James Walsh, the publication’s community coordinator for news.  The second London excursion included a visit to the Design Museum and a trip to the BCC, where students saw the newsroom, watched a couple of live segments, and also made a radio program and practiced filming a news show, Russell said.

“I loved going to the Guardian and talking with an actual reporter and being able to ask him questions,” Bandlamudi reflected. “I also really enjoyed going to the Design Museum and finding design principles which applied to our intended career choice.”

Another unique opportunity for students was a Film Sites tour back in Oxford, where they saw famous landmarks that have been used in films like the Harry Potter series, Russell noted.

“Study abroad is a tremendous experience, and students who like a challenge (their tutorials with Oxford professors are probably harder than any class they've ever had), appreciate history and like to travel on weekends should definitely consider the UGA@Oxford program,” Russell said.

The next Grady@Oxford program will be June 26 through Aug. 5, 2016, and it will be led by Yan Jin, associate professor of public relations and the associate director of Center for Health & Risk Communication at Grady College. For more details, visit https://oxford.uga.edu/students/grady-college/summer-2016.