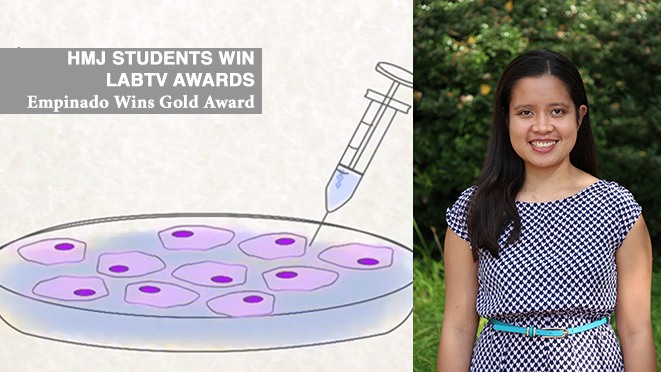 Young journalists who can tell stories across a variety of platforms have an edge in today's marketplace, and six students from the University of Georgia's Health and Medical Journalism Program have not only done just this-they've also won national recognition and cash prizes for their great work.

The students won six of 21 top awards in the LabTV Tribeca Video Awards Contest. Each entry is a video profile of a young scientist, typically a Ph.D. candidate or post-doctoral student, working in a biomedical research lab at UGA.

The winners included:
Gold Award ($2,000): Hyacinth Empinado was honored for a role model video of Jena Chojnowski in the Lauderdale Lab

Finalist ($1,000): April Bailey was honored for a role model video of Farah Samli in the Donald Harn Lab

Finalist ($1,000): Lee Adcock was honored for a role model video of Melissa Young in the Lab of Philip Holmes

Semi-finalist (($500): Andrew Lowndes was honored for a role model video of Babak Basiri in the Lab of Michael Bartlett

Semi-finalist ($500): Alyssa Stafford was honored for a role model video of Doug Terry in the Lab of Stephen Miller

Semi-finalist ($500): Ansley Stewart was honored for a role model video of Robin Webb in the Lab of Steve Stice

The HMJ program has built video storytelling into the curriculum for the past six years. Students also write for print and digital markets and create graphics and data visualizations. However, requiring graduate students to enter a national competition is a new twist.

“This summer, when I was totally revamping the advanced HMJ course, I decided to make LabTV an assignment for the course,” said PatriciaThomas, the Knight Chair for Health and Medical Journalism and director of the HMJ program at Grady College of Journalism and Mass Communication. “It's so important for researchers to be able to communicate clearly with people who aren't scientists, explaining what they do and why. The young scientists profiled for LabTV get practice giving interviews, at the same time young science writers get practice conducting them. It's a win-win situation.”

LabTV is an innovative, web-based video platform that showcases short, engaging videos of young medical scientists in labs across America. The mission of LabTV is to inspire today's high school and college students to become tomorrow's heroes of medical science. Unlike the first contest that included only student filmmakers, this competition also included entries from professional videographers. LabTV is supported by the National Institutes of Health and Google in cooperation with major universities.

Thomas continued, “when we screened the videos a few days before they were submitted for judging, I remember saying `Let's get out there and sweep the awards.' And they practically did.”

Empinado, who was one of three first-place winners, was surprised to hear she had won. She says the award fueled her ongoing interest in producing educational programming for shows like NOVA or other science shows on PBS.

“I thought this was a cool project because it was a good combination with what we were doing in class,” she said. “I love shooting and editing and this provided me an opportunity to work with my After Effects skills through the animation.” Empinado plans to invest her prize money in camera equipment or lights for future projects.