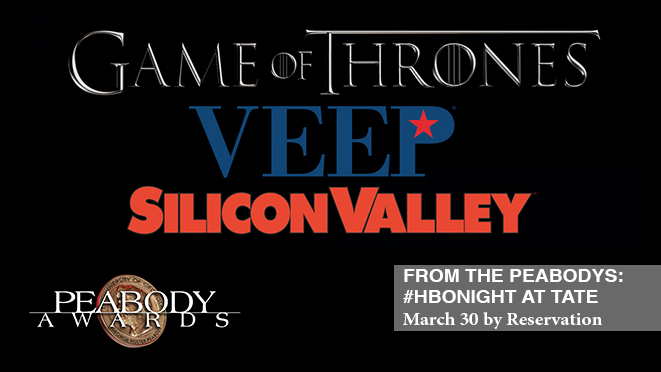 Home Box Office will preview the new-season openers of three of its hit shows, including the Peabody Award-winning “Game of Thrones,” at the University of Georgia's Tate Center movie theater on March 30. Episodes of the comedies “Veep” and “Silicon Valley” will also be shown at the event, cosponsored by the Peabodys.

HBO “will be inviting the Grady School of Journalism and friends of the Peabodys,” according to the cable network's Mokihana Gushi.

All guests must pre-register via an emailed invitation or through the Peabody Awards Facebook page.

In addition to viewing the shows, guests who have RSVP'd will be treated to a reception with refreshments in the atrium area outside the Tate Theater. The reception for invited guests will start at 5 p.m. followed by the screenings at 6 p.m.

Past HBO-Peabody screenings at UGA include “The Journalist and the Jihadi,” a documentary about murdered Wall Street Journal foreign correspondent Daniel Pearl, and “Yesterday,” a Peabody-winning film about AIDS in Africa.

“Game of Thrones,” based on the popular book series “A Song of Ice and Fire,” by George R.R. Martin, is an Emmy®-winning, hit fantasy series that chronicles an epic struggle for power in a vast and violent kingdom. Season five begins April 12.

“Veep” launches its 10-episode fourth season on Sunday, April 12 (10:30-11:00 p.m.). Created by Armando Iannucci, this Emmy®-nominated series stars Emmy® winner Julia Louis-Dreyfus as Selina Meyer, the onetime vice president and now president of the United States, who is running for election to keep herself in office.

“Silicon Valley” returns for its ten-episode second season Sunday, April 12 (10:00-10:30 p.m.). Mike Judge (“Office Space,” “King of the Hill”) brings his irreverent brand of humor to HBO in this Emmy®- and Golden Globe-nominated comedy series, which looks at the modern-day epicenter of the high-tech gold rush, where the people most qualified to succeed are the least capable of handling success.

Home Box Office, Inc. is the premium television programming subsidiary of Time Warner Inc. and the world's most successful pay TV service, providing the two television services — HBO® and Cinemax® — to approximately 122 million subscribers worldwide. The services offer the popular subscription video-on-demand products HBO On Demand® and Cinemax On Demand®, as well as HBO GO® and MAX GO®, HD feeds and multiplex channels. Beginning in April 2015, HBO will also offer a standalone video streaming service, HBO NOW, in the U.S. Internationally, HBO branded television networks, along with the subscription video-on-demand products HBO On Demand and HBO GO, bring HBO services to over 60 countries. HBO and Cinemax programming is sold into over 150 countries worldwide.

The Peabodys, the oldest awards in broadcasting, are considered among the most prestigious and selective prizes in electronic media. The Peabody Awards recognize excellence and meritorious work by radio and television stations, networks, webcasters, producing organizations and individuals. The 16-member Peabody Board is a distinguished panel of television critics, industry practitioners and experts in culture and the arts. Selection is made by the Board following review by special screening committees of UGA faculty, students, and staff. For more information regarding the Peabody Awards program, visit www.peabodyawards.org.