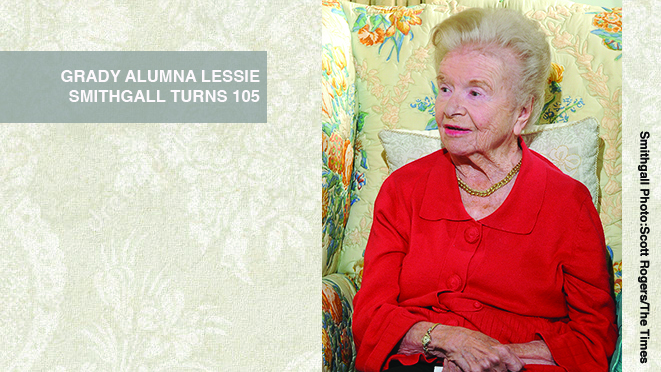 As we approach April 1, 2021, we wish Lessie Smithgall a happy 100th birthday. Read this 2021 interview with Smithgall, published in the Atlanta Journal-Constitution.

In a year when the prestigious Peabody Awards turn 75, Smithgall celebrates her 105th birthday on April 1.

Smithgall’s role is a pivotal one at Grady College. She is a 1933 graduate of Grady School—before it became Grady College—where she was a member of Phi Beta Kappa and the social sorority Alpha Gamma Delta. It was her first job at WGST radio in Atlanta where she met her husband, Charles, before they both left to went to work at WSB radio in Atlanta.

Her boss at WSB, Lambdin Kay, also served on the executive committee of the National Association of Broadcasters. He was lamenting one day that he needed to find a home for awards that recognized excellence in radio, similar to the Pulitzer Prize. Smithgall offered to introduce Kay to John Drewry, dean of her alma mater.

Smithgall’s legacy at Grady College continued when she and her husband endowed the Lambdin Kay Professorship in 1997 in memory of her former boss. The professorship became a chair in 2003 and is currently held by Peabody Awards Director Jeffrey Jones.

“Good ideas, such as creating an award for radio, happen all the time,” said Jones. “What is often lacking is a person who knows how to transform good ideas into concrete realities. Mrs. Smithgall was a significant force in doing just that.”

Horace Newcomb, who served as the Peabody Awards director before Jones and held the chair, talked about Smithgall’s impact at Grady College in a 2011 interview with The Gainesville Times.

“She is considered one of the leading graduates of the Grady College,” Newcomb said. “Her career with her husband in newspapers and radio is impressive in itself and of course the family’s philanthropy throughout the state is massive.”

The Peabody Awards also hosts a lecture every year known as the Peabody-Smithgall lecture in her honor. Previous speakers have included John Huey, retired editor-in-chief at TIME and historian Henry Louis Gates Jr.

Smithgall still lives in Gainesville, Georgia, the town she and Charles moved to in 1941 when he began radio station WGGA. In 1947, they bought what is now known as The Gainesville Times, which they sold in 1981.

Smithgall also authored a book about her life called “I Took the Fork,” and she and her late husband are the benefactors of the Smithgall Woods Conservation Area in Helen, Georgia.

The Times published an updated interview with Smithgall on April 1, 2016.