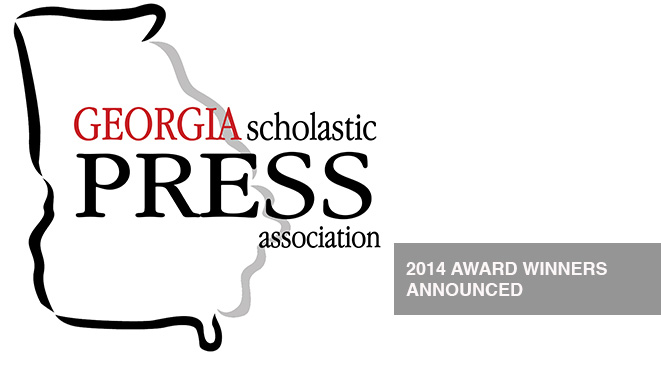 The 2014 Georgia Scholastic Press Association (GSPA) Awards were announced April 25 at the University of Georgia, recognizing the best in high school journalism throughout the state.

“These programs, and especially their advisers and students, are to be commended for producing outstanding journalism over the academic year,” said Joe Dennis, director of GSPA, which is housed in the Grady College of Journalism and Mass Communication. “Each year the quality of high school journalism gets better in the state, so earning All-Georgia recognition is a significant accomplishment.”

Jenny Alpaugh of Clarke Central High School was chosen as the “Georgia Champion Journalist,” GSPA's award for the state's top student journalist. Alpaugh serves as editor-in-chief of her school's publication Odyssey Newsmagazine, where she leads a staff of 50 students to produce the award-winning publication and website. Through her tenure at Odyssey, Alpaugh has won several awards for her writing and has complimented her journalistic pursuits with a resume that includes multiple academic achievements, including being selected for the 2013 Governor's Honors Program, being named an AP scholar and earning a Ramsey scholarship to attend the University of Georgia.

Ramona Griffin, adviser of The Silver Star at Shaw High School in Columbus, earned GSPA's “Adviser of the Year” award, while her publication earned the organization's “Freedom of the Press” award for reporting on several difficult issues in The Silver Star, which ultimately led to the school censoring the publication.

“Mrs. Griffin showed tremendous courage and encouraged her student to pursue issues of critical importance to its readership, such as the real effects of drug use, and weight and body image,” Dennis said. “She implements in her students not only the value of journalism, but the importance of serving your community.”

In addition to overall publication awards, GSPA distributed 130 individual awards in 41 different categories, recognizing the best individual journalistic pieces from students in categories focusing on writing, photography and production. A full list of winners is available online at www.gspa.uga.edu, as well as a video featuring the awards announcement.

Founded in 1929 at the University of Georgia's Grady College of Journalism and Mass Communication, GSPA serves more than 3,000 high school journalism teachers and students throughout the state through conferences, workshops, publications and its annual awards competition.