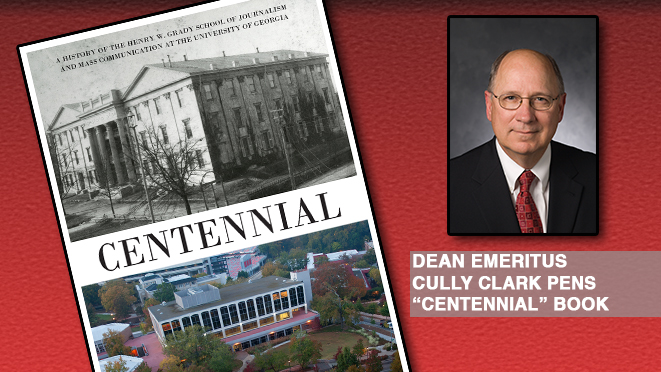 “It was a labor of love and an incredible journey,” said E. Culpepper “Cully” Clark, dean emeritus, of his most recent book, “Centennial: A History of the Henry W. Grady College of Journalism and Mass Communication at The University of Georgia,” which is now available for purchase.

The book chronicles the students and faculty of Grady College, and provides a narrative of how Grady alumni have had an impact on world history and the industries it serves. The stories in the book range from how Steadman Sanford lobbied to establish the School of Journalism in 1915 and the decision to name it after Henry W. Grady, to tales of its legendary deans, the creation of the Peabody Awards, the development of curriculum to meet ever-changing demands and the growth of the college in numbers of students and faculty.

Being a historian at heart, Clark vividly superimposes the Grady College timeline in context with local, national and global events including wars, desegregation, politics and growth of the entertainment, broadcast, print and digital fields.

“It’s incredible to realize the things that have happened in the world and the country and the state, and know that this college was part of it,” Clark said.

“I wrote the book because I knew we needed a Centennial history for the college,” Clark continued. “We had put together a committee to think about how we might go about it and I thought it would probably be a collaborative effort with many contributors, which it was.”

Clark has recorded a series of short videos profiling key people and stories from “Centennial.” The embed below details why he wrote the book and the folliwng videos are avaialble for viewing:

E. Culpepper Clark discusses the growth of UGA Grady College through the decades

E. Culpepper Clark talks about the legacy of John Drewry

E. Culpepper Clark on what was behind the 1953 Red & Black resignations

E. Culpepper Clark on the evolution of Grady College courses

E. Culpepper Clark on the impace of Dean Tom Russell

E. Culpepper Clark talks about the origin of the Darwin-David award

“Centennial” is available for purchase at the UGA bookstore, online on Amazon.com and at several upcoming Grady functions.

Clark, who wrote his master’s thesis about Henry W. Grady, knew much of the history about how the college was created and evolved before serving as Grady College dean from 2006 to 2013. He collected more research during his time as dean, but it was not until his retirement that writing began in earnest with a lot of research at the Hargrett Rare Book and Manuscript Library and interviews.

Clark admitted that the book even includes stories that make him uncomfortable, but that needed to be told.

The book also includes a rich visual history of the college with more than 230 photographs and a vast appendix listing many who have influenced the college.

Grady College will receive royalties from the book, which was published by Mercer University Press.