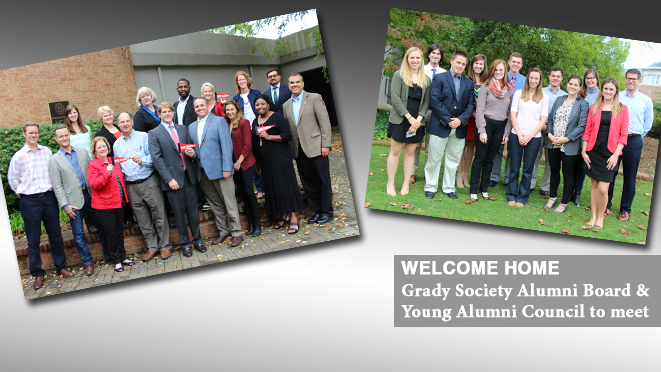 As part of Homecoming Week—a time for reuniting and celebrating—Grady College welcomes back members of the Grady Society Alumni Board (GSAB) and Young Alumni Council (YAC) for their fall meetings, which take place on Friday, Oct. 16.

“The GSAB and YAC are cornerstones of Grady College, linking our most dedicated and loyal alums with the college. Through their time, talent and treasure, board members give back to Grady and encourage others to do likewise, building the bonds between generations of Grady graduates,” said Dean Charles Davis. “It’s such a joy to spend time with these dedicated volunteers who give so much to our students.”

Together the GSAB and YAC will discuss programs that support students, such as mentorship and networking opportunities, as well as brainstorm about how best to support the college by way of sponsorships and annual giving.  They will also meet as separate groups to tackle additional objectives.

Marking a change in leadership on the GSAB, outgoing chair Eric NeSmith (ABJ ’02) of Community Newspapers Inc. will ceremoniously pass the gavel to Bryan Harris (MA ’03) of Jackson Spalding.

“I’m honored and humbled to be the next chair of the Grady Society Alumni Board,” said Harris.  “I know that I have large shoes to fill. Eric NeSmith has done a fantastic job shepherding our board the past few years.  He’s been a great steward of the college and the model for future chairs.

“Building off of what Eric started, I hope that our board can continue to mentor the current generation of Grady students and welcome them into the enormous family of Grady graduates that are impacting their world in positive ways,” Harris continued. “We also want to remind those graduates that the Grady College will forever be woven into the fabric of their college experience and to invite them back to impart their wisdom on the next generation of graduates that will carry on the Grady tradition.”

Along with Harris and NeSmith, the 2015-16 GSAB includes:

The Grady Young Alumni Council, an extension of the GSAB, serves the college by facilitating the transition from student to active young alumni.  The current chair is Jacob Cole (ABJ '09, MA '11) of the Harbin Clinic.  Other members of the 2015-16 YAC are: