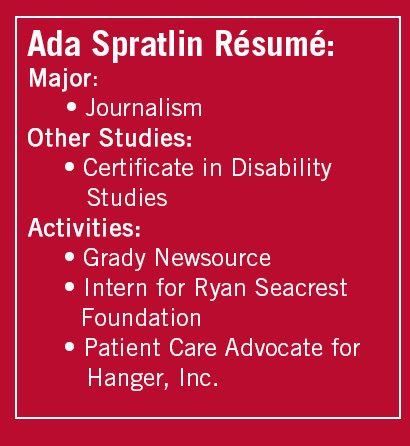 Most University of Georgia students have obstacles they overcome during college. While Ada Spratlin has done a masterful job overcoming the mental obstacles most students face, it’s the physical obstacles, like hills, that offer the biggest challenge.

Those challenges have helped shape Spratlin, a fourth-year student studying journalism, but they have not defined her. Instead, she has taken her unique set of abilities and transferred them into a wheelhouse of skills focused on helping others through traumatic times in their lives.

“There are kids here that far outstretch my own,” Spratlin said. “To me, I don’t have a disability. I just have limb differences and different abilities.”

Those limb differences include the fact that Ada is missing a right arm and a right leg as the result of a train accident when she was six-years-old. At the time, she was living with her grandmother in Ethiopia. Because her grandmother was in poor health and medical care was more difficult in Ethiopia, Ada came to the United States when she was seven for medical care, and through a series of events, was adopted by the family who was hosting her.

“The greatest gift my grandmother gave me was putting me up for adoption,” Spratlin recalled, opening the way for Paige and Jeff Spratlin to welcome Ada into their family that includes another daughter and two sons. “I can never thank my parents enough,” Spratlin says, falling short of becoming emotional.

Spratlin’s story is special and because she was the subject of several interviews when she was younger, journalism piqued her interest and led her to it as a field of study.

“I have an ability to communicate well with others and I want to be able to use that ability in the biggest way possible,” Spratlin says.

Culminating her studies, was taking the Newsource course, a semester-long experiential learning class where students are tasked with putting together a 30-minute news broadcast two times a week. It is a course that brings fear and trepidation to most students because of its demands and expectations. Dodie Cantrell-Bickley, a lecturer and co-producer of Newsource, taught Spratlin and got to know her well.

“Ada defines the word tenacity, stick-to-it-tiveness, and  frankly, attitude,” Cantrell-Bickley, said.  “You can’t tell her ‘no’ if she is coming after you for an interview because she is so pleasant, which is a great gift.”

It’s Spratlin’s attitude that drives her to conquer those hills and most defines her.  When Spratlin is asked what she wants others to know about her, she is short and concise: “Ada can take anything. Give her a task, she will do it and can do so much more.”

To those who know Spratlin, there is no doubt this is true. 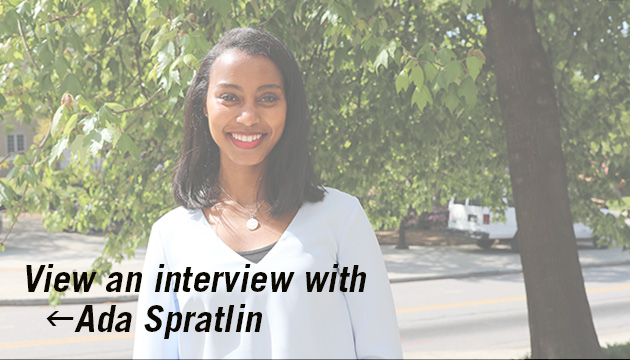 1. She interns at the Ryan Seacrest Foundation in Atlanta helping with multi-media projects enjoyed by children with cancer as a way to divert their attention from their medical treatment.

“We are trying to take their mind off what they are there for, and give a breather to the parents that their kids are having fun,” Spratlin, who travels into Atlanta once a month with a team of students, said. “It’s good for them, but it’s really, really great for us. Because we are in school, we think that this small part of our life here is the only thing going on in the world and it take us out of it for while when we are there. And, to be a part of these kid’s lives for a small window of time is amazing.”

2. Spratlin works at Hanger, Inc., a national orthotic and prosthetic specialist as a patient care advocate. Her work involves meeting with patients of new prosthetics sharing details of how to get the most out of their new limbs and sharing “war stories” as Spratlin calls them. She also travels to the local hospitals, meeting with patients and families, guiding them through what to expect after amputations.

“My boss told me when I first started, ‘you have such a great opportunity to talk with these people in a way that we can’t. We have the knowledge, we just don’t have the experience to back it up,” Spratlin, a certified amputee peer advisor, said.

3. When she graduates, she will have earned her Certificate in Disability Studies.

“I signed up for it because I thought, ‘hey, I know a lot about this,’ but there is always so much more you can learn,” Spratlin said.

The Certificate of Disability Studies focuses more on intellectual than physical disabilities, and while working toward that, Spratlin had the opportunity to become a mentor with Destination Dawgs, a program at the University of Georgia to meet the needs of students with intellectual disabilities.

Listen to the audio interview below for more details about the Certificate in Disability Studies. 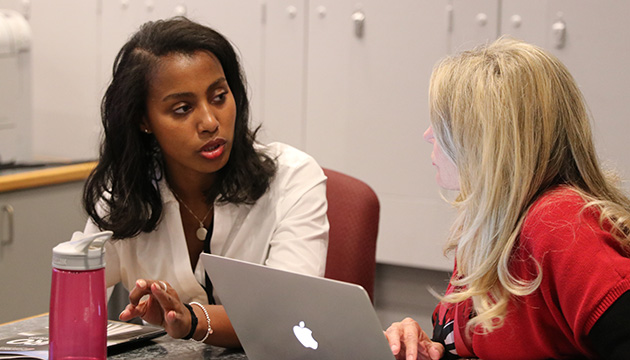