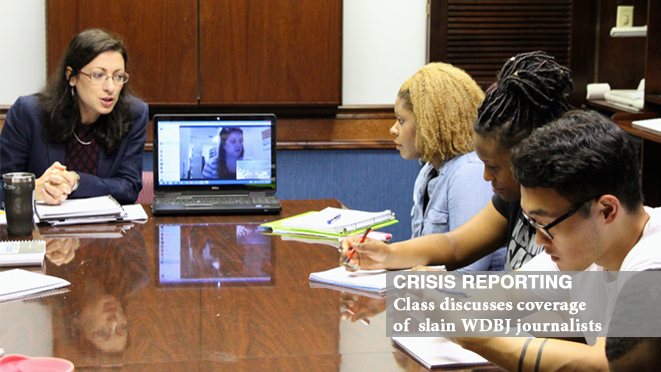 The news of reporter Alison Parker and cameraman Adam Ward of Virginia-based WDBJ7 being killed on live television while covering a feature story hit close to home for journalists around the nation.  But for Margaret Grigsby, a digital content manager for WSLS 10, an NBC affiliate in Roanoke, the story unfolded only miles away.

Grigsby shared a personal account of what it was like to report on the crisis with Ivanka Pjesivac’s Digital and Broadcast Reporting class via Skype on Thursday morning, just over 24 hours following the shooting.

She described the atmosphere in the newsroom as “quiet chaos,” a time when everyone had to come together, put feelings and opinions aside, and use all available resources to cover various angles of the story on multiple platforms.

Sticking to the nuts and bolts of journalism was paramount to effective crisis reporting, according to Grigsby.

“The facts, the emotions and general respect for human life are the three things that we focused on yesterday to round our coverage,” she explained, “to make sure that it was balanced and appropriate and served its purpose.”

One decision that had to be made was whether to broadcast footage of the murders.   Screening the video posted on social media by the gunman was especially shocking, she said.

“That was the first time that anyone showed any emotion in the newsroom,” Grigsby recalled. “Everyone screamed and covered their eyes.”

Ultimately, the station decided against airing the video.

“If people want to see it, it’s out there (on other platforms), and that’s fine.  I don’t judge anybody for that,” she said.  “But we’re not going to focus on that.”

WSLS 10 Virginia Today anchor Jenna Zibton joined the conversation to discuss how journalists must place their emotions on hold and do the best work they can do, no matter how difficult the story.

“Yesterday was hard, but when something like that happens, you go off of adrenaline more than anything,” Zibton said. “I think when we all got in our cars and left for the day was when it all hit.”

She continued, “You have to take care of yourself, and everyone does that differently.  Find a way to process, if that means talking to your friends or going to a counselor.”

Pjesivac, a friend of Grigsby since graduate school, arranged the call because she viewed it as a valuable lesson.

“For students, I thought it would be very important to hear from someone who could offer a first-hand experience of how crisis situations are covered, especially the ones that are close—personally and emotionally—to them,” Pjesivac said.  “How to keep the distance in reporting such events, but also how to cover these events technologically in every possible sense.”

Junior Lauren Herbert said she appreciated the opportunity to hear from journalists who were in the thick of crisis reporting.

“In the wake of a horrible tragedy, they were able to put their emotions aside—out of the newsroom—and go on throughout the day, which is something I will have to learn to do,” Herbert said.