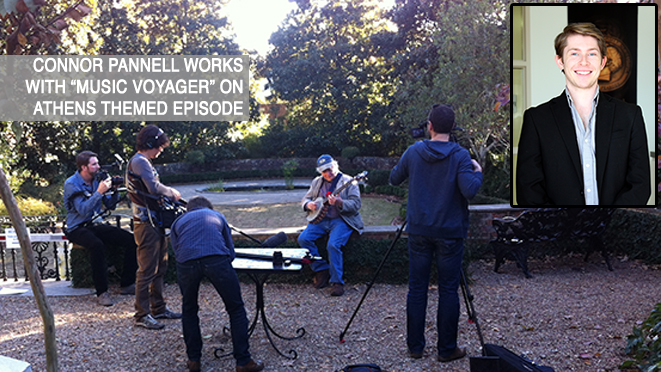 Grady student Connor Pannell worked with “Music Voyager,” a TV travel series that explores the music, food and culture of different cities around the world, on a recent Athens-themed episode that aired on Georgia Public Broadcasting this month.

Pannell, a mass media arts major who works as an editor and in-house cinematographer for the Peabody Awards, was referred to “Music Voyager” based on his previous work.

Pannell, who has lived in Athens since 2002, took on the two-day challenge with “Music Voyager” of conquering the many sights of Athens.

On day one, they ventured to the Richard B. Russell Building Special Collections Libraries and Founders Memorial Garden to film local artist and musician Art Rosenbaum, ending with an interview and filming of The Whigs performance at 40-Watt Club.

Some of Pannell’s most exciting memories came from day two as the crew met at the house of musician, Kishi Bashi, where they filmed a live performance in Bashi’s recording studio resulting in an improv session between Tacuma Bradley, the host of “Music Voyager,” on the saxophone and Kishi Bashi playing electric violin.

“The entertainment factor of them in the same room was enough to benevolently paralyze anyone who heard what the two were kicking up,” Pannell said. “How many people such as myself get an opportunity to have a casual one on one with Kishi Bashi?”

Pannell was grateful for the experience and credited his success to his teachers and Grady College education.

“I am lucky to have been taught by several intelligent, thoughtful, and amazing professors while at Grady,” he said.