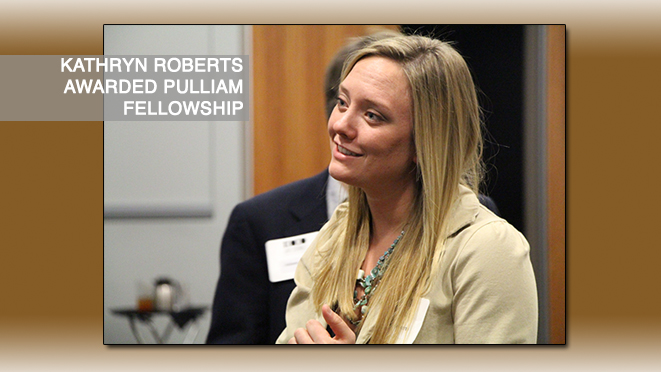 Kathryn Roberts, a Grady College journalism major with a public affairs emphasis, has been selected to participate in the 2015 Pulliam Journalism Fellowship operated by Gannett Co. newspapers.

Roberts, a senior from Johns Creek, Georgia, will work as a paid reporter at The Arizona Republic and will participate in reporter training organized through the fellowship.  Selection into the 10-week program, which describes itself as “exciting and demanding,” is highly competitive.  About 20 student journalists are selected nationally based on their experiences through internships and college media and a commitment to a career in news.

“It will be a lot of hard work, but I will come out of it with more essential journalism skills to help lead me into the fast-paced world of news media,” Roberts said. “I can't take all the credit for this opportunity. Without the guidance of the Grady College, especially my professors Keith Herndon and John Greenman, I wouldn't be able to proudly call myself a Pulliam Fellow today.”

“Katy is a mature, thoughtful reporter, and a cogent, forceful writer,” Greenman said. “Katy will excel as a Pulliam Journalism Fellow just as she has in Grady and as a staffer in four news organizations.”

“Katy is a great example of the work ethic it takes to grow as a reporter and writer,” Herndon said. “As a former Pulliam Fellow myself, I know this program will challenge her, and it will also reward her for the effort she puts into her craft.”

Roberts interned with FastCopy Communications, an Athens-based freelance company, which included assignments for The Atlanta Journal-Constitution.  Roberts has been recognized as a McGill Fellow, and her excellent performance in an advanced course on business journalism led to selection as a Cox-SABEW Fellow, a training program sponsored by Grady’s Cox Institute for Journalism Innovation, Management and Leadership and the Society of American Business Editors and Writers. Roberts also earned a media leadership certificate through the Cox Poynter Leaders program, a leadership development initiative of the Cox Institute and the Poynter Institute.

The Pulliam Journalism Fellowship began in 1974 and is named for its originator Eugene C. Pulliam, a journalist and publisher. Pulliam, who was mostly known for his ownership of The Indianapolis Star, bought and sold more than 50 newspapers across the country during his career, according to his grandson, Russ Pulliam, who now directs the fellowship program.