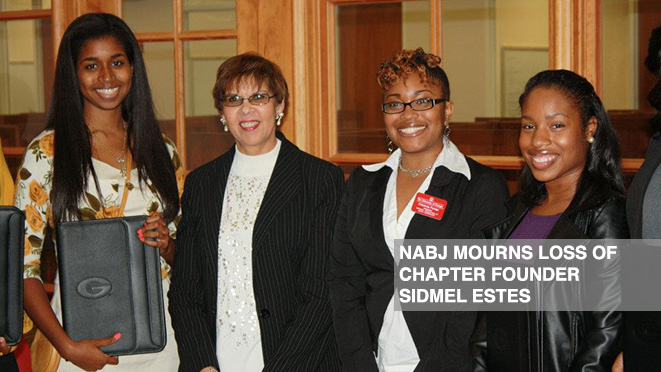 During its Induction Ceremony on Oct. 8, UGA’s chapter of the National Association of Black Journalists honored the late Sidmel Estes with a moment of silence.

“Sidmel was a pioneer and without her there may never have been a UGA chapter of NABJ,” said Mandi Woodruff (ABJ ’09), a UGA NABJ executive board alumna. “We were doing special work, but it was Sidmel who really did the hard part—clearing a path and building our foundation nearly two decades ago.”

Estes was elected the first female president of the NABJ national organization in 1991, and increased its membership to over 2,000 members during her tenure. She founded the University of Georgia chapter, developing it and serving as a keynote speaker on various occasions.

“I will never forget seeing her cheering us on when we won Student Chapter of the Year at the NABJ conference in 2007,” Woodruff recalled.

Aside from her work for NABJ, Estes worked as an executive television producer for WAGA-TV/Fox 5 and served as the co-creator and executive producer of “Good Day Atlanta,” winning seven Emmy Awards for her work. She went on to found BreakThrough Inc., a renowned media consulting firm where she served as CEO. She also taught as an adjunct professor at Emory University and Clark Atlanta University.

Estes passed away on Oct. 5, 2015, at age 60. She was a strong symbol of the greatness that NABJ exemplifies and will continue to serve as a role model for our young members in their hopes of achieving the same success.