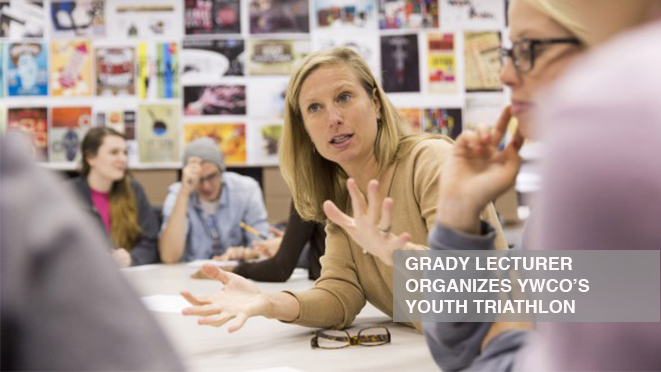 As 5-year-old Haden was entering the swimming portion of the Athens YWCO's “Kids Tri the Y” youth triathlon two years ago, race director Kim Landrum noticed all the race's adult helpers — or “swim angels” — already were with other children.

Not wanting Haden to feel pressured by the racers behind him and knowing from prior talks with his mother that the young racer would need some help, Landrum kicked off her running shoes, jumped in the water fully clothed and helped him swim the 50 yards to the next portion of the race.

Since then, Haden has had a special bond with Landrum, a lecturer in the Grady College of Journalism and Mass Communication. Haden also has gone on to compete in several other youth triathlons.

Children like Haden are the reason Landrum works with youth athletes and YWCO, one of the organizations supported by UGA's Campaign for Charities, which ends Dec. 15. Landrum said she loves to see how the children tackle the race, which includes biking, swimming and running on a closed course, and push themselves during each leg.

“When you see 5-year-olds giving it everything they've got out on the bike course — gritting their teeth, but they do it and they don't give up — then how can we as adults not learn something from them,” Landrum said. “They're pretty special.”