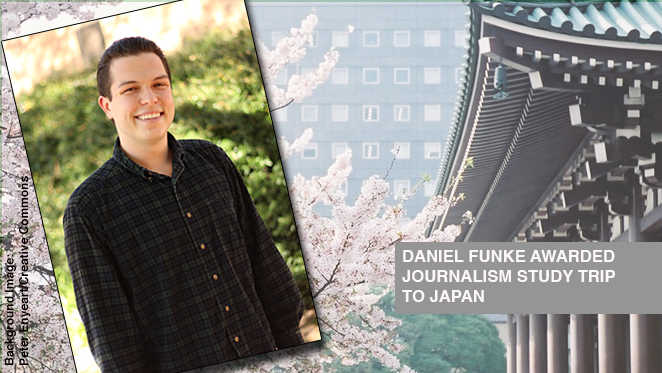 Funke, from Alpharetta, Georgia, is a junior studying journalism, international affairs and Spanish. He serves as a digital producer for USA Today College, is editor-in-chief of The Red & Black and managing editor of Ampersand Magazine on campus. He worked as a breaking news intern at The Atlanta Journal-Constitution and will spend this summer at the Los Angeles Times as a Web intern.

“As a journalist, I could not be more excited at the prospect of traveling abroad and meeting people different from me,” said Funke, who spent December in Israel with the American Jewish Committee’s Project Interchange and has studied abroad on a number of University of Georgia programs. “The level of exposure granted by traveling abroad is invaluable and has made me a better journalist as a result.”

Though he has just over a year remaining in his college career, Funke is well on the path to the international journalistic success he seeks. A contributor to numerous national publications, he has been on the pulse of breaking news across the country, including the U.S. Supreme Court ruling in favor of same-sex marriage in June. Funke’s focus is on LGBT issues in America and he is interested in reporting on human rights on an international scale.

“Grady College has served as the backbone of my journalism education,” said Funke. “By using my Grady education in tandem with my experiences at The Red & Back, The Atlanta Journal-Constitution and USA TODAY, I’m confident that I’ll be well-prepared to tackle my trip to Japan and, eventually, life after graduation.”

Funke, who wants to work as a digital storyteller with publications like “The Atlantic” or The Washington Post, said he believes this unique experience in Japan will offer international exposure to further his career both at Grady College and after.

“I think that I will be better suited to provide an objective and complete view of international relations,” said Funke. “It’s hard to grasp the reality of international issues and conflicts unless you’ve actually seen them on the ground.”

The competition, established in 1984 in cooperation with Indiana University Journalism, honors Roy Howard, the journalist who led Scripps Howard Newspapers from 1922 to 1953 and United Press from 1912 to 1920. The trip is awarded to competition winners by the Scripps Howard Foundation. This marks the 11th year the foundation has given the trip.

“The Scripps Howard Foundation strives to develop the next generation of leaders in journalism through programs such as the Roy Howard National Collegiate Reporting Competition,” said Liz Carter, president and CEO of the Scripps Howard Foundation. “As always, there were many outstanding applicants this year, and we are excited about their potential, in particular those who were chosen as winners.”

The winners’ entries represent print, broadcast and online media and were chosen for the high quality of their work, an essay about their interest in international affairs and letters of recommendation.

The expenses-paid trip May 12 and will take students on excursions in the Kansai region, including the cities of Osaka, Kyoto and Kobe. Students will visit Hiroshima, the Hiroshima Peace Memorial Museum and Park and Tokyo.