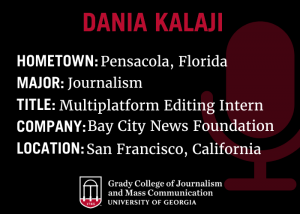 Briefly describe your internship and your responsibilities.

I am a Dow Jones News Fund intern. I’m in a cohort of around 150 other Dow Jones news interns who are placed in specific newsrooms around the country. These newsrooms have a contract affiliation with the Dow Jones News Fund so that they can better equip younger journalists. The one I’m with is called Bay City News Foundation. It is based in Oakland, California, but I’m living in San Francisco. It’s a newswire and a nonprofit that covers the entire Bay Area.

My internship is really flexible, so some days of the week, I’ll be writing daily news stories that are cast out on its newswire to around 8 million audience viewers. On the other hand, I’m also working on bigger capstone stories. Although my position is listed as a copy editor, they’re giving me the ability to also write stories – which is really great for me, because that’s my forte. I’m doing a mix of writing, copy editing and social media.

What has been your favorite part about your internship so far?

My favorite part about my internship so far would definitely be the 10 day training at the University of Texas. For those 10 days, it was long hours and pretty rigorous training, but it really taught me how important it is to be a well-rounded journalist. It doesn’t just take writing, telling a story and giving people voices that we seldom hear – it’s also about the nitty gritty stuff. By that, I mean headlines, SEO and framing your stories in particular ways on social media or in newspapers as well.

I was in a cohort with about 15 other Dow Jones news fund interns and that was the best part of it, being able to make new friends that are at my exact same level in journalism and my age. It was great to connect with them, and connect with the professors that were leading the program and to hear from different panelists from, for example, the Wall Street Journal and the Washington Post – it was really such a well-rounded experience.

What about this role has surprised you?

I think what’s most surprising is the trust that they’ve placed in me as an intern. I think that it’s really important when they place trust in you, because it allows you to grow and to see where your interests lie. I’m really interested in arts and entertainment, as well as critical writing. I think having that time to experiment is very important. Having these resources around you, all the professional journalists who’ve been in the industry for so long, they want to give you the guidance and the training. I think that is surprising to a lot of interns, especially myself, is that people really do want to help you and see you thrive. That’s why they gave you this position.

Given that trust, I’m able to cover bigger stories. I’m working on this huge story on the Bay Area about gentrification and how it’s affecting artists of color. The trust they’ve placed in me is what gives me that confidence to reach out to what I call “sharks”, those are the sources that are really hard to seek and are sometimes impossible to reach. But because your mentors give you that competence, you never know what could happen. So, because I was able to reach out to this person, with the confidence and the trust they’ve given me, I now have this really big interview, and I wouldn’t have had that if they didn’t push me to do so.

How will this internship guide you in your future career path?

Coming into college, I felt really lucky knowing that journalism is what I wanted to do, and choosing UGA wasn’t hard because I knew Grady had such an incredible program that sets you up perfectly for all these careers. I got my current internship because I did an internship last summer with Pensacola News Journal, which is my hometown paper. It’s part of Gannett, which is the USA Today network. I was able to get that internship because my professors and mentors at Grady, who were the ones that pushed me to do so. They gave me that competence to do it, because I knew I could, but I just needed to hear it from other people who I trust and look up to as models. After getting that internship, that’s when I was able to open my network in the journalism world. Now, I feel that I’m in a good place to explore the many options of journalism. Since I’ve been at The Red and Black (this will be my third year now), I’ve moved my way up in the ranks. I started as a contributor on the news desk, and then I was the outreach manager, and then I was the diversity, equity and inclusion chair for a year. Coming into the fall, I’ll be the digital managing editor. It’s really cool to be able to immerse yourself in everything that Grady and UGA has to offer, because that’s what’s going to ultimately lead me into my next role.

This internship is teaching me about different aspects of journalism, so that I can figure out exactly what I want to do later down the road. Given all of these opportunities, I’m really interested in the arts and entertainment world of journalism. I think the landscape of being a critic and writing film reviews is really exciting. What also excites me is breaking news and enterprise stories that are focused on diverse communities, and the people that we don’t really get to hear from a lot. When you look at my work, that’s what my stories are mostly focused on. I think as a young journalist, being able to navigate through all these internships and through all the different opportunities that you’re given is such a blessing because you get to experience all aspects of journalism.

How have your experiences at Grady prepared you for this internship?

I’ve started speaking at a lot of journalism classes, especially the journalism seminar that Dean Davis leads. Every time I’m asked to speak in those seminars, I always start with this, and it’s that if I hadn’t joined The Red and Black, I would not be where I am right now. I say that with full confidence. Without The Red and Black, I wouldn’t be half the journalist I am today. It’s so easy to start somewhere there, and then so quickly get sucked in and go up the ranks. All of a sudden, you’re the digital managing editor, and it’s because you love it so much. It’s just an overall well-rounded experience. Through The Red and Black, I’ve been able to work alongside people, not only in my journalism cohort, but people of different ages. It’s cool to communicate with everyone and build those relationships, because it shows you how important it is to keep those people close to you, because we’re all going through the same thing. The Red and Black is like my home – I’m really lucky to have found a student-run publication that’s made me feel so comfortable, and that I can grow in any aspect that I want to.

I really think that the professors at Grady are so well-equipped for the world beyond college, and they really prepare you for that. Out of all the classes that I’ve taken, two classes I took in the past semester have especially prepared me for this internship. One of them was feature writing with Nick Chiles. I’ve never been challenged that much in a course before, and it’s because he really pushed us to be the best journalism students we could be. Especially in feature writing, I learned how to display human emotion through stories – and it’s really hard. You don’t really know how hard it is until you’re actually sitting there with a blank Google doc, and you’re like how do I even start…how do I convey a human emotion through this hour long interview that I just had? Also, I took a multiplatform story production with Charlotte Norsworthy. She’s so incredible – she was also my newsroom advisor at The Red and Black, and part of the reason why I’m in this internship today is because she’s just so stellar. I learned so much about not just writing a story, but how to equip it with good visuals, audio, video and social media – all the things you need in today’s day and age in any journalism role. Those two classes really showed me how important it is to put care into my journalism classes as much as I put care into working at The Red and Black. At the end of the day, those professors are going to be vouching for you, and they will remember you.

Grady InternViews: Julia Walkup
Briefly describe your internship and your responsibilities: I assist writers and producers for the Ana Cabrera show by finding and pulling visual elements to air while Ana is anchoring, and […]
learn more

Grady InternViews: Jonathan Wood
Briefly describe your internship and your responsibilities. I work with the real estate and development team on downtown development around and within the stadium, (currently that is the Shipyards Project […]
learn more

Grady InternViews: DonA Traylor-Askew
Briefly describe your internship and your responsibilities: My internship was 10 weeks. I spent the first five weeks on Sportscenter and the second five weeks with NBA Today. I was […]
learn more

Grady InternViews: Edward Feininger
This is part of a series where we ask Grady College students to describe their summer internship experience. Briefly describe your internship and your responsibilities: As a graphic design intern, […]
learn more

Grady InternViews: Madison Greer
This is part of a series where we ask Grady College students to share their summer internship experience. Briefly describe your internship and your responsibilities. I am an intern in […]
learn more

Grady InternViews: Luke Yearwood
This is part of a series where we ask Grady College students to describe their summer internship experience. Briefly describe your internship and your responsibilities My internship is one that […]
learn more

Grady InternViews: Frankie Barnes
Briefly describe your internship and your responsibilities:  My primary job as the events programming intern is to assist with coordinating all aspects of large scale entertainment events that take place […]
learn more

Grady InternViews: Darby Taylor
This is part of a series where we ask Grady College students to describe their summer internship experience. Darby is participating in the Grady LA field study and internship program. […]
learn more

Grady InternViews: Caleb Smathers
This is part of a series where we ask Grady College students to describe their summer internship experience. Briefly describe your internship and your responsibilities: As a project manager, my […]
learn more

Grady InternViews: William Daughtry
Briefly describe your internship and your responsibilities: I do freelance work with The Current and contribute to articles as they need them in Glynn and McIntosh County, which covers coastal […]
learn more