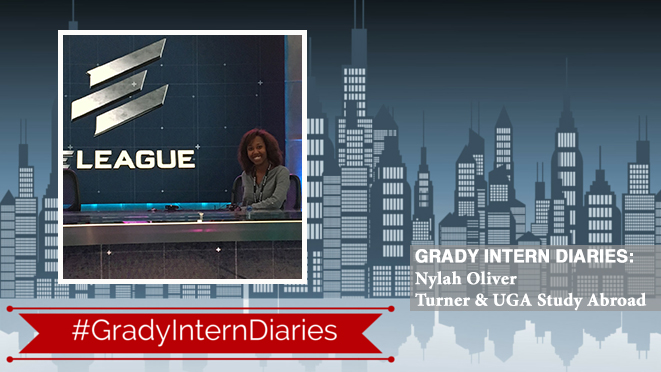 This is part of a series where we asked Grady College students to describe their internship experiences during the summer. To see pictures of our Grady students interning, please see our #GradyInternDiaries social media collection.

As a studio runner for E-League at Turner, I made sure that everything ran smoothly for a steady production: delivering equipment, reports, and even food to the studio and all staff and guests. There were many post-production duties, but pre-production at the Cobb Energy Center in preparation for the championship games was one of my favorite tasks. I also had the opportunity to assist the stage manager, work with the production manager to schedule catering and other delivery services, and meet the entire Turner Classic Movies staff and employees from Cartoon Network and other departments around the campus.

In addition to participating in the Bali & Beyond Study Abroad Program, as an intern I met with the directors to create effective communicative methods to increase program awareness and to select top students to participate for future dates. I was also enrolled in photojournalism where I took endless photos of the Balinese people and their historic culture.

Grady College: What was the biggest challenge you faced during your internships?

Nylah Oliver: As a studio runner, I was technically working as a freelancer. I’m still in school, so of course I wanted the opportunity to network and make connections for job opportunities and other endeavors upon graduation; however, it was overwhelming at the beginning. I wanted to balance working eleven-hour shifts while trying to roam the building and meet new people. I quickly realized that it wasn’t so hard—not for someone with my personality at least. I spoke to every individual that crossed my path and people noticed how genuine and hardworking I was. I did everything with a smile and any room or hallway I entered, people wanted to know my name or what I was there to do. I turned a challenge into something fun!

My biggest challenge in Bali was being one of two Black students on the trip. It may sound strange, but going to a place where majority of the natives have your skin color, but everything else is so different can be awkward when every question or conversation starter is “Oh, Balinese skin…but your hair so different,” and other things of that nature. It wasn’t really a challenge, but kind of something that I just had to realize was new to them. I quickly turned my differences into something I could share and teach many of the Balinese people around me.

G.C.: What was the best part about your summer internships?

N.O.: The best part about being a studio runner was when I received my badge! I couldn’t contain my excitement and I went around the building seeing which studios, storage cages, and even outside doors I could get into. Getting my I.D. and also the catered meals—three FREE meals a day is all a college kid ever wants.

The best part about interning in Bali, Indonesia was the people. Many of them didn’t speak English, but the language barrier simply made me want to dig deeper and find out more about their story and how they lived with such rich culture and deep religious beliefs. Sitting in Okawati’s outside kitchen as she cooked for hotel guests and learning about her life was one of my greatest experiences in Bali—that and learning how to surf!

G.C.: What is the most memorable experience you had during your internships?

N.O.: Mardy Beeson—THE senior sound producer. Mardy took me under his wings and always had something to teach me about HD and other technical subjects. I’ll never forget him pulling out a humongous roll of old film that some commercials were filmed on and giving it to me to take that home. Mardy invited me on a TCM set with Ben Mankiewicz and introduced me to the entire TCM crew. I’ll never forget him or his willingness to show me the world!

Surfing was hands down the most memorable experience I had in Bali. I’d never surfed a day in my life and to top it off we were a mile out into the Indian Ocean. Can you say gnarly?

G.C: What is the most valuable lesson or skill you learned during your internship?

N.O.: At Turner, the most valuable lesson I learned was to GO FOR IT. People love when you take initiative. For example, going in to watch the set-up of the championship games when you’re not scheduled—just to get the experience. If you want to learn how something works, watch how it’s done, then YOU try it! Ask how you can help or learn the task. There’s always someone yearning to show you the ropes.

In Bali, one of the most valuable lessons I learned was to simply appreciate different cultures and respect their beliefs. I live by that daily, but going across the other side of the world was completely different—basically every doctrine was different from what I’ve grown up knowing. That didn’t stop me from being open to learning and experiencing their culture with full force. I’m a completely different person because of it.

G.C.:  What advice would you give to a student looking for an internship?

N.O.: Really do your research, but also be willing to go after a position that may not have been at the top of your list. It’s not until you’re actually behind those doors and in the studio or the control room that you can truly see and understand those internship titles we read about on a company’s website. Be open to experiencing a role that isn’t constantly in your dreams. It will only get better from there.

G.C.: What part of your Grady education did you find most valuable during your internship?

N.O.: Simply learning how to take initiative. In Grady, every professor wants you to strive for the top and with that comes a lot of drive and determination. If you’re hesitant about reaching a goal, you probably won’t make it. My Grady professors taught me to push through—push through those tough assignments, push through when I had two hours left to meet a deadline, push through when I locked my keys in the car and had an interview for a news story within the same hour—and I took that with me to my internships.

G.C.:  When you look back on your internship 10 years from now, what part of your summer internship do you expect to be most thankful for?

N.O.: The people. The people at Turner Broadcasting—especially those in Turner Sports with E-League—opened my eyes to the world. It has so much to offer and I would’ve never known the extent to which I can do in media if it weren’t for them.