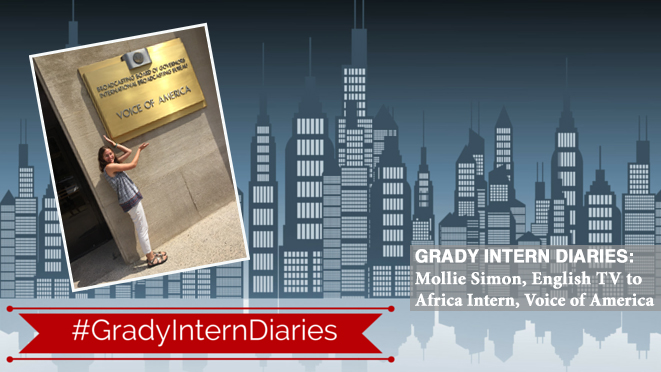 This is part of a series where we asked Grady College students to describe their internship experiences during the summer. To see pictures of our Grady students interning, please see our #GradyInternDiaries social media collection.

Title of Internship: English TV to Africa Intern at Voice of America

Responsiblities: This summer, I had the chance to work on two different broadcasts: “Africa 54,” a 30-minute daily news show, and “Straight Talk Africa,” a weekly, hour-long political talk show. My main duty throughout the summer was to assist our social media manager, which meant everything from posting to Twitter using Hootsuite to uploading clips from the shows to YouTube and Facebook and creating highlight reports of high-performing stories. Outside of social media work, I had the opportunity to create two of my own TV packages, shadow a producer for a shoot, run the teleprompter, escort guests and more.

Grady College: What was the best part about your summer internship?

Mollie Simon: The people I had the chance to work with were what made my experience so special. Not only did I love my fellow interns, from University of Maryland to the University of Virginia, but the people in my office were all patient, generous in answering questions and good-humored. The supervisor for my internship also fostered an environment of encouragement and always sent out kudos to the interns for jobs well-done on tasks.

One of the great traits of Voice of America as an international broadcast service is that it has employees who come from around the globe. During one of the many classes offered during the summer, someone described VOA as a “miniature United Nations,” a phrase I saw ring true as I walked down the halls and heard endless different languages being spoken. This diversity was exciting and provided me the chance to learn about places beyond D.C.

G.C.: What was the most memorable experience you had during your internship?

M.S.: It is not everyday that you hear someone in a TV control room yell out, “Oh, the king is here,” but at VOA, I got to hear just that.

At the beginning of the summer, the Ooni of Ile-Ife, a king of the Yoruba people in Nigeria, came to our division for an interview on being a modern leader in Africa. When my fellow interns and I saw him, we did not know quite how to react and ended up heading the opposite direction, because after all, he was wearing a golden cap and holding a gold-studded staff. With the encouragement of our co-workers, we re-approached the scene to see the king, and while we did not converse with him, it was exciting and memorable to know that the shows we were working on were bringing in such interesting and important individuals and characters for our viewers.

G.C.: What is the most valuable lesson or skill you learned during your internship?

M.S.: As a public affairs journalism major, I have spent most of my time at Grady focused on print and digital media and had not ventured into broadcast, except for a few simple video projects. I loved the opportunity to peer into the world of broadcast journalism this summer, from learning to appreciate what goes into live TV to tinkering with Final Cut Pro. I believe the ability to edit a video package on my own will be an incredibly important skill moving forward, no matter what type of outlet I may work for.

G.C.: What advice would you give to a student looking for an internship?

M.S.: Be sure to explore all the different programs available at UGA for internships–even outside of Grady, and if you are in the Honors program, consider applying for Honors in Washington! Also, try to reach out to previous interns who have worked where you are applying as they can give you firsthand information on what the workplace atmosphere is like and what is expected of interns. Knowing what you may be asked to do can help you better sell the different skills you have and how you can use them to benefit your office.

Secondly, I would tell internship seekers that it is okay to pick a location where you want to work and then to use that as a limiting factor for where you apply. Where you live can play an enormous role in your experience and learning, and I am so grateful my internship brought me to D.C.

G.C.: How will your summer internship affect the way you approach the rest of your time at UGA?

M.S.: While in D.C. and living in UGA’s Delta Hall, I tried to take the time to explore the city, whether on runs, farmers market adventures, bakery-finding missions or while visiting the many monuments, museums and parks. Throughout the summer, I gained a newfound sense of independence that I hope to carry back with me to Athens. I realized that with the busyness of classes, clubs and all the excitement on UGA’s campus, I have not always taken the time to get to know the city itself. When it comes to reporting on the city, I think this has been detrimental, and I want to come back and truly get a feel for Athens and the surrounding counties, from off-the-beaten path sites to popular landmarks, the same way I did in D.C. while interning.