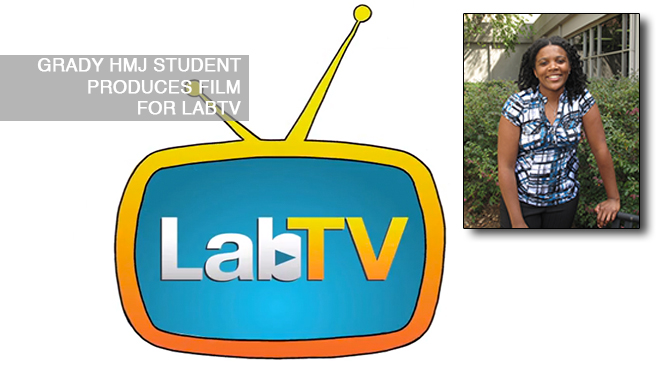 The Health and Medical Journalism program at Grady College has begun work with LabTV to produce human-interest video profiles. The profiles have a specific focus on women and minorities to encourage more students to pursue careers in medical research.

“Innovation is the key to the future, and we need ideas from everyone. If science is thought of as a place where only some people flourish, we all lose. LabTV is working to change this,” says Professor Patricia Thomas, Knight Chair in Health and Medical Journalism from Grady College. “I've been in hundreds of labs during my long career as a science and medical journalist, and I've seen first-hand that women or people of color are in short supply.”

LabTV's online video platform showcases short videos of young medical scientists, the “human faces of medical research”, to inspire today's students to consider becoming a medical scientist themselves. The first film produced by Grady HMJ student April Bailey recently received a top ten prize at the Tribeca Film Festival from LabTV. The profile was of Hillary Danz, a doctoral candidate who is researching infectious diseases at the UGA College of Veterinary Medicine.

“Our goal,” said LabTV founder Jay Walker, “is to help students find role models they can identify with — young scientists who are people just like themselves, and who share their dreams and passions.”

Dr. Francis Collins, Director of the U.S. National Institutes of Health, has repeatedly stated that America needs visible role models in medical research. “I am concerned that the best and brightest in this nation may be drawn to all kinds of things, but biomedical research maybe seems a little out of reach. Not quite sure what goes on there. Not quite sure they know somebody who works in that space. This is what LabTV is designed to do.”

Accordingly, the National Institutes of Health (NIH) is encouraging universities to open their doors to LabTV so that both professional and student filmmakers can create the videos that will celebrate young scientists and excite today's students.

“Medical research is the greatest science adventure of our time, but almost nobody knows about it,” said LabTV Executive Producer David Hoffman. “On LabTV our short videos are about people, not about science. The medical scientists we profile are passionate young men and women from every background, every nation and every ethnic group. They both find medical research incredibly exciting and rewarding and are eager to encourage today's students to enter the field.”