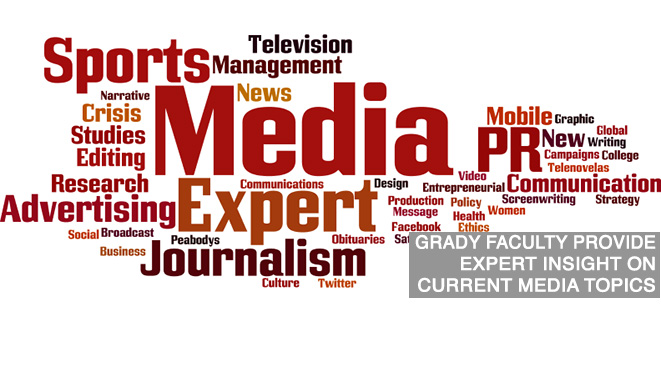 Following is a list of topics that Grady College faculty have been talking about recently via media interviews and their research.

Grady faculty are fluent in a variety of subjects ranging from crisis advertising campaigns and sports, to social media trends, pop culture and health communications.

If you are interested in interviewing one of our Grady faculty members, please contact Grady College Director of Communication Sarah Freeman at 706-201-5373 or by email at FreemanS@uga.edu.

Karen King, professor of advertising, is interviewed by Marketplace about the likelihood success of an advertising campaign sponsored by the paper industry. (September 15, 2015; text and radio interview)

Bill Lee, professor of journalism, talks with the Atlanta Journal-Constitution about a suit filed by ASCAP against two Atlanta bars for copyright infringement. (September 3, 2015; text)

Keith Herndon, a visiting professor of journalism, talks with the Associated Press about the willingness of consumers to pay for print and online news. (September 30, 2015; text)

Janice Hume, the Carolyn McKenzie and Don E. Carter Chair for Excellence in Journalism, head of the Department of Journalism and author of “Obituaries in American Culture,” is quoted in this article from Pacific Standard about the evolution of obituaries. (September 16, 2015; text)

Carolina Acosta-Alzuru, associate professor of public relations, is quoted in this New York Times article on the reduction of the number of telenovelas that are currently produced in Venezuela (August 18, 2015; text)

Jones also was interviewed by “On Second Thought” about late night television and its evolution the past several years. (September 22, 2015; radio interview)