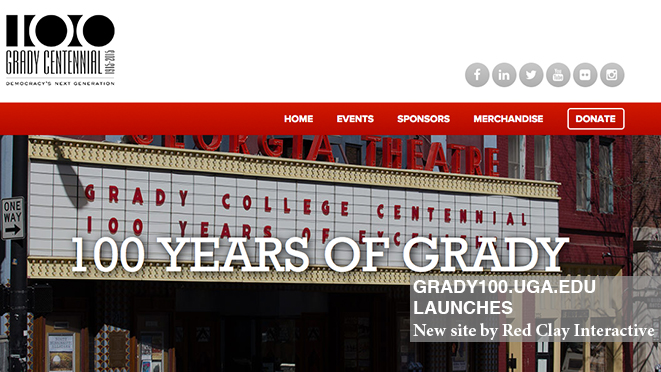 Interactivity, flow and Grady pride are the hallmarks of a new website celebrating the Centennial Celebration of the College. The new site, Grady100.uga.edu, was designed as a generous gift-in-kind by Red Clay Interactive.

“Grady College's stunning new Centennial pages are a testament to the loyalty and skill of our alumni base and the professionalism of our staff,” commented Charles Davis, dean of Grady College. “It all started when Red Clay asked the best question a college can hear: “How can we help?” and we formed a partnership between Red Clay Interactive and our communications team. Grady College alumni working side by side with Grady staff, embodies the spirit of the Centennial.”

The website is designed in two phases. The first phase includes details about Grady's Centennial events, a social media aggregator, areas where alumni and friends can submit written memories and photographs, and sponsorship information. The second phase, expected to launch by the beginning of 2015, will include a timeline of historical milestones and areas of archive photos, stories and videos.

Design of the site was carefully considered, right down to using Rockwell font, which is just shy of 100 years old, as well as Proxima Nova, a sans serif font that is newer. The site also employs the use of Parallax movement, which features the appearance of images and text that are stacked to create the illusion of each being on a different plane.

It was not a difficult decision for Red Clay Interactive when they agreed to take on the project since several employees at the company are Grady graduates.

“We were excited to take on this partnership with the Grady College and saw it as a way to say thank you for the major role the school has played in the success of Red Clay Interactive,” said Lance Compton, CEO of Red Clay and a 1995 graduate of Grady College. “Not only do we have multiple Grady grads on staff leading our agency, but the heritage of the school and its influence on Red Clay runs to its core. The love of advertising, being creative and using words and stories to impact people's lives, were taught to both myself (ABJ `95) and my brother (creative director Brett Compton, ABJ `91) at an early age from our father, Frank Compton (ABJ `68). His influence is what led both of us to attend the Grady College and have successful careers.”

In addition to Lance Compton and Brett Compton, other Grady College alumni who worked on the project include Kait Poncsak (ABJ '13), account coordinator, and Lindsey Marshall (ABJ '05), account director.

“The Comptons, a multi-generational Grady family, run Red Clay Interactive — one of the most innovative digital marketing firms in existence,” Davis added. “It has been a labor of love to work with them in creating the Centennial web site, knowing it was built by Grady, for Grady.”