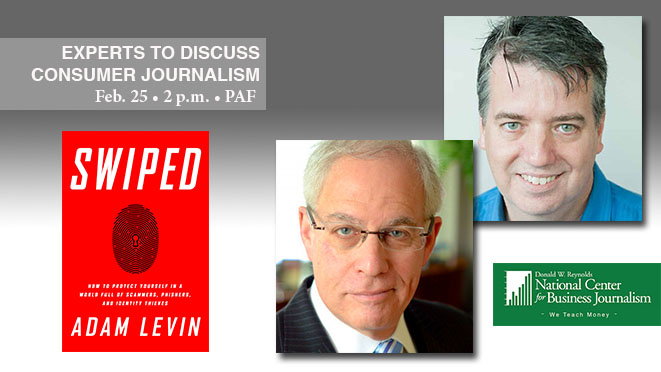 Two experts will visit the Grady College on Feb. 25 to talk about the role journalists need to play in educating consumers about identity theft and ways to prevent it.

“Identity Theft: A Discussion on Consumer Journalism” will take place at 2 p.m. in the Peyton Anderson Forum.

Bob Sullivan, a consumer journalist and author of the New York Times bestsellers “Gotcha Capitalism” and “Stop Getting Ripped Off,” will interview Adam Levin, consumer advocate and author of the new book “Swiped: How to Protect Yourself in a World Full of Scammers, Phishers, and Identity Thieves,” about his book and what’s happening to consumers in a time when privacy is seriously challenged. They will take questions from the audience and discuss how consumers can protect themselves from the growing legions of scammers.

The event is presented by the Donald W. Reynolds National Center for Business Journalism.

​Adam Levin is a consumer advocate with more than 30 years’ experience in personal finance, privacy, real estate and government service. A former director of the New Jersey Division of Consumer Affairs, Levin is Chairman and founder of Identity Theft 911, Chairman and co-founder of Credit.com and serves as a spokesperson for both companies. An expert on personal finance, credit, identity management, fraud and privacy, he writes a weekly column which appears on Huffington Post and ABCNews.com. He is a frequent guest on television, and has appeared on Fox News, Fox Business News, Good Morning America, Fox & Friends, CBS Nightly News, ABC World News Tonight and scores of radio stations throughout the country.

Bob Sullivan has appeared as a consumer advocate and technology expert numerous times on NBC’s TODAY show, NBC Nightly News, CNBC, NPR’s Marketplace, Terry Gross’ Fresh Air, and various other radio and TV outlets. In addition to his books, Bob's work has appeared in The New York Times, the Wall Street Journal, and hundreds of other publications. He helped start MSNBC.com and wrote there for nearly 20 years, most of it penning the consumer advocacy column The Red Tape Chronicles.