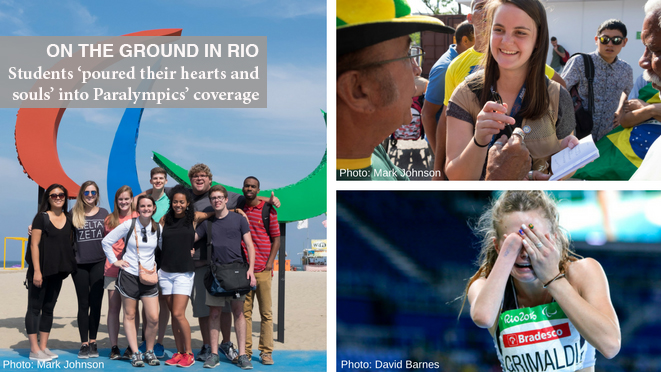 To overcome physical challenges and rise to compete at the highest level of parathletics—the Paralympic Games—takes an awe-inspiring amount of training and dedication.  To report respectfully and responsibly on the amazing feats of those athletes takes a special kind of journalist.  That was the task for nine Grady College students who covered the 2016 Games in Rio in September.

Through a partnership with the Associated Press, David Barnes, Jenn Finch, Josh Jones and Casey Sykes (from visual journalism) and Jamie Han, Emily Giambalvo, Emily Greenwood, Kendra Hansey and Kennington Smith (from Grady’s Sports Media Certificate program) worked in teams to produce multimedia content from the first half of the Games that was distributed globally.

“They just completely knocked it out of the park,” said Mark Johnson, head of the college’s visual journalism program.  Johnson and Vicki Michaelis, director of Grady Sports, supervised and edited the students’ work in Rio. “I know we brag about our kids a lot because we have spectacular students,” he continued, “but the way those nine worked the situation, the way they dug deep to find great stories, poured their hearts and souls into it for all the time they were on the ground in Rio, was just unbelievable.”

In advance of the trip, the students researched the athletes and events, and talked through possible story ideas to pursue.

“When you go to a Paralympics, everyone has an amazing and dramatic story,” Michaelis said. “So you have to apply a whole new standard to ‘what stories are we going to tell.’

“I always ask my students, ‘why now and why should I care?’’” she explained. “The ‘why now’ is really obvious—they’re competing at the Paralympics.  But the ‘why should I care’ became the question that needed to be answered before we’d continue with the story.”

Unlike at the Olympics—where it can be hard to get a unique story because there are hundreds of other reporters going after that same story—journalists at the Paralympics were granted more access to athletes and coaches, according to Michaelis, a veteran Olympics reporter and the John Huland Carmical Chair in Sports Journalism & Society.

“Our students could really operate as full working journalists,” she said. “They didn’t have to rely on hanging on the fringes of press conferences and group interviews to get what they needed. They were able to interact one-on-one with the athletes and coaches and set up meetings outside of the venues.”

One example was Kendra Hansey’s preview story about U.S. Army veteran Melissa Stockwell, a paratriathlete from Team USA who was competing on Sept. 11.

“Stockwell served in Iraq, she lost her leg to a roadside bomb,” said Michaelis.  “When Kendra sat down with her, Stockwell talked about what an honor it was to be able to go out and represent her country on 9/11.”

Stockwell won a bronze medal that day.  But the silver and gold medals also went to Americans, an incredible moment covered in an article by Emily Greenwood and captured in photos by photojournalism student Jenn Finch.

“Those pictures of the three women on the podium are pretty powerful to see,” said Johnson, “particularly being on the fifteenth anniversary of the September 11th terrorist attacks.”

Another story shared by publications around the country was Emily Giambalvo’s piece about a table tennis player who was homeless as a teen.

“It quickly turned into a larger story than I expected when [the athlete] opened up about struggles during his childhood,” Giambalvo reflected. “It forced me to ask some of the hardest questions I’ve ever asked as a reporter, all while being in the new environment of an international sporting event.”

Added Michaelis: “That’s the kind of story that rises above…table tennis being this person’s refuge and guiding light through his early life.”

While in Rio, the students relied on skills they learned in Grady College courses, as well as on-the-spot advice from Michaelis and Johnson.

“The Paralympics is complex in terms of classifications of competition, because the athletes’ impairments are so varied,” said Greenwood. “It was a challenge to understand, and accurately report on, the different classifications in each event. Professor Michaelis has always stressed the importance of accuracy and doing your research, though, so I relied on checking and double-checking my work before submission to make sure I was accurate. Having Professor Michaelis as an editor is tremendously helpful, as well.”

Kennington Smith, who wrote about how sighted guides coordinate with athletes, among other stories, also leaned on Michaelis’ guidance.

“Professor Michaelis helped me so much throughout the process. There was one time in particular where I had about four or five story ideas that I had worked on that all fell through within an hour,” Smith recalled. “I was very frustrated but she worked with me and I ended up with a great story to tell at the end of that day. Overall, she taught me that in journalism, I must be patient and the right story will always come.”’

“The Visual Journalism program has instilled a sense of responsibility when covering any event or undertaking any job,” said David Barnes. “As journalists, it’s our duty to be objective reporters and, of course, that applies to the Paralympics. When we went to cover assigned events, I often reflected on class lessons to help deal with all the noise and focus on what was in front of me so I wouldn’t be overwhelmed.”

According to Johnson, the students handled themselves like true professionals.

“I think it’s critically important that (the Paralympics) get covered in a professional manner, in a respectful manner,” Johnson said. “These are athletes who spend their entire lives striving to get to this place in the same way that Olympic or professional athletes do.  That was the big message that we tried to get to the students.  They looked at (them) not as disabled athletes, but as professional athletes.  That, to me, says a lot about our kids.”

As a public relations major, Greenwood produced branded content for sponsor Coca-Cola, in addition to writing for the AP. (Coca-Cola funded a portion of the students’ travel expenses, and ThinkTank Photo donated and Canon USA loaned equipment for the visual journalism students.)  Regardless of the career path she chooses, Greenwood, who plans to apply for law school, believes the experience will help her stand out.

“Few people can claim to have stories in the Washington Post and New York Times at 21 years old, but Grady Sports has given me that opportunity,” she said.

“The fact that UGA and Grady were willing to go the extra mile for us to have this experience further solidifies my love for this school,” added Smith. “This opportunity was everything I could ask for, plus more.”

Photojournalism student Josh Jones also gained a lot from the experience. “This trip helped to advance my career goals by showing me that I can perform at a high level and on extremely tight deadlines in an international setting,” Jones said. “I’m so thrilled with this amazing opportunity Grady provided for me and the once-in-a-lifetime experience I had in Rio.”

As remarkable as the experience was for the students, it was equally, if not more, special for Michaelis.

“It very well may have been the most validating experience of my life…how often does a teacher get to see her students apply what they learned in a real-world setting and have it be that high quality?” she asked. “I feel very fortunate that I was able to have that.”

UGA students to cover 2016 Paralympic Games for The Associated Press