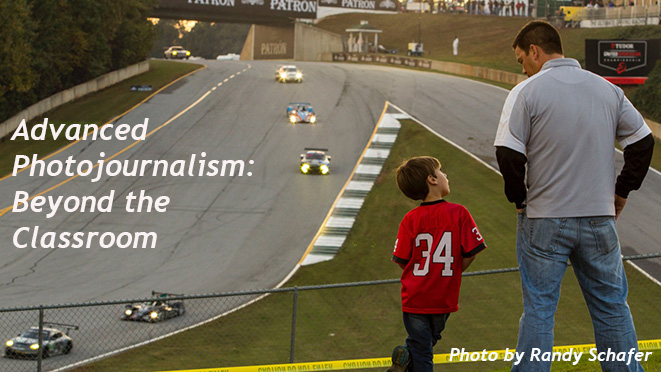 One of the biggest teaching challenges is providing real-world experience through the classroom. For Grady College faculty member Mark Johnson and his 12-student advanced photojournalism class, that real-world experience took the form of a two-day, intensive photo shoot at Road Atlanta’s Petit Le Mans event in October.

“This is one of the most important things I can do for them,” says Johnson of the experience. “No other program does motor sports, and there aren’t many places you get racing, promotion, fans and an international element all rolled into one. Even those students who know nothing about cars get a lot out of it because it’s about the people.  That’s what matters most.”

The Petit Le Mans project encompasses a two-day shoot in which the students go through every step that professional photographers do ranging from obtaining credentials and attending a mandatory safety meeting, to photographing all aspects of the race, downloading pictures every few hours and writing captions. This is the eighth time the event has been offered to Grady students, and the experience is funded in part by a grant from the Georgia Press Association.

“The main purpose was to find stories among the crowd,” explained Damien Salas, a journalism major with a photography and publications emphasis from Ashburn, Va. “We were asked to document the people who attend the race with an emphasis on the family aspect.  There is a community in racing fans, and while it’s exciting to shoot cars moving fast, it’s all about slowing down to see the fans.”

Jessica Banes, a journalism major from Acworth, Ga., said she and her father had been watching racing for years, but this experience gave her a totally new view of racing.

“It was very cool to get that level of access,” said Banes of their ability to go to whatever part of the racetrack they wanted, including the meet-and-greet area with the drivers.

Another highlight of the program was the interaction the students had with five professional photography mentors.  The mentors for this year included Barry Allen; Mike Haskey, chief photographer for the Ledger-Enquirer in Columbus, Ga.; Robert Johnson, director of photography for The Weather Channel; Woody Marshall, photo editor for the Macon Telegraph; and David Wallens, editorial director for Grassroots Motorsports.

The mentors were responsible for providing feedback and constructive critiques for the student photographers throughout the event.  Road Atlanta, the track where the race was held, provided garage space where computers were set up, allowing the students to download, crop and tone images throughout the day.

“We would get a critique every hour or two on how to improve our shots,” commented Lexi Deagan, a journalism major with a visual journalism emphasis from Athens, Ga.  “Working with the pros really made your images better.”

“It is critical for me to put other voices in their head, because there are so many points of view” explained Johnson of one of the project goals.

The mentors seemed to get as much out of the experience as the students.

“Honestly, I thought it was awesome,” said Wallens, who is a 1992 Grady graduate.  “It was neat watching the students as they progressed and introduce them to something new. It is a ton of opportunity packed into one day.”

Another alumna of the photojournalism program, Amanda Duval (ABJ ’10), now works as a digital media producer with the American Le Mans Series, and helped coordinate details and credentials for the students and mentors.

“We gave the ALMS one of our best graduates and they are giving back,” commented Johnson.

In addition to feedback from the professionals, the experience had other opportunities for growth.

“This was the first time that I was shooting with a bigger lens,” commented Hilary Maloney, a journalism major with a visual journalism emphasis from Forsyth, Ga.  “It was a great place to learn because a track has so many repetitions so you can really work on sharpness and focus.”

The students were also required to report names, ages and contact information for any people they photographed.

“You have to learn to do it all if you want to survive in this field,” commented Banes.  “You really get to know the fans as people.”

In addition to being onsite shooting a live sporting event for the first time, there were other challenges the students faced.  Saturday was a full day with many of them working from 7 a.m. until 10 p.m., but most agreed that the time went by very quickly.   Another obstacle was the unexpected rain.

“It was a challenge, but we worked through it,” commented Deagan.  “The best thing about it is that people were still out doing what they were doing.”

At the end of the weekend, more than 30,000 images were captured by the 12 students.  The assignment required that each student pick their best 20 images and submit them to Johnson for a grade.  Several of the images photographed by the students were posted by Autoweek and Grassroots Motorsports on social media platforms, and many of the students posted their best work on their personal photography blogs, as well as through a live photo blog of the event. For an example of the student’s work, please visit: http://www.autoweek.com/article/20131020/ALMS/131029985

“Mark encouraged us to capture the emotion of the race,” concluded Maloney.  “I was totally uninterested in racing, but I was able to find something to connect with, which means Mark did a good job.  There were stories everywhere.  It’s all about stories, and we learned how to take them.”

Nickolas Bradley, 30, helps Wes Schatten, 13, change a tire at the Continental Tire booth atthe 16th Annual Petit Le Mans at Road Atlanta in Braselton, Georgia, on Saturday, Oct. 19, 2013. Bradley, a native of Smyrna, Ga., is a member of Continental's marketing team, so he teaches spectators like Schatten, an eighth grader at Sutton Middle School in Atlanta, Ga., what it is like to be a part of a pit crew. (Photo/Laura Thompson, lthomp@uga.edu)

The Corvette Racing number 3 car spins off the track just before turn 11 at Road Atlanta in Braselton, Ga., on Saturday, Oct. 19, 2013. The number 3 car finished 14th overall and 6th in the GT class. (Photo/Jessica Banes, jabanes@uga.edu)