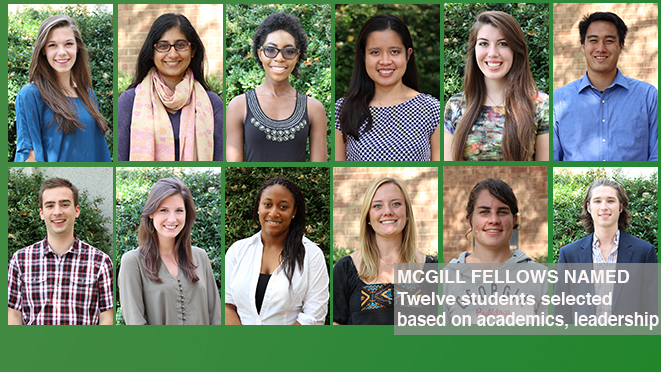 Twelve undergraduate and graduate students have been named McGill Fellows by the University of Georgia Grady College of Journalism and Mass Communication.

The students were selected by a faculty committee “for their strengths in academics, practical experience and leadership,” said John F. Greenman, professor and Carter Chair in Journalism, who chaired the committee.

The McGill Fellows are:

The McGill Fellows will:

This is the eighth class of McGill Fellows. The first class was selected in 2007.

For more than 30 years, the McGill Lecture has brought significant figures in journalism to the University of Georgia to help honor Ralph McGill's courage as an editor.

McGill, while editor and publisher of The Atlanta Constitution, was regarded as the “conscience of the south,” using the newspaper's editorial pages to challenge segregation in the 1950s and 1960s. McGill was awarded a Pulitzer Prize in 1958 for “long, courageous and effective leadership.”

About Grady College
Established in 1915, the UGA Grady College of Journalism and Mass Communication offers undergraduate majors in journalism, advertising, public relations, digital and broadcast journalism and mass media arts. The college offers two graduate degrees and is home to the Peabody Awards, internationally recognized as one of the most prestigious prizes for excellence in electronic media. For more information, see www.grady.uga.edu or follow @UGAGrady on Twitter.