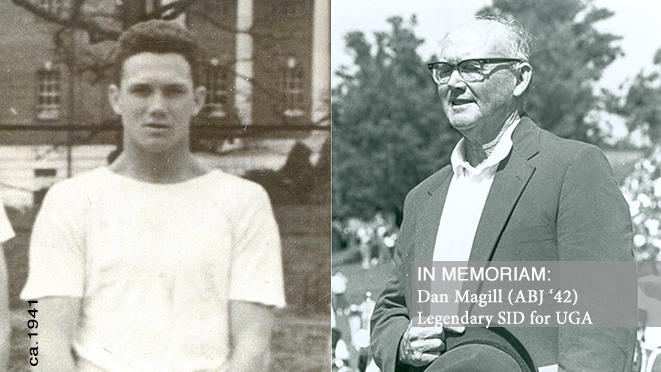 It is with heavy hearts that the alumni, faculty and friends of Grady College mourn the passing of one of UGA's great ambassadors and Grady alumnus, Daniel Hamilton Magill, Jr. (ABJ '42), on August 23.

“Coach Magill represents the essence of Grady College and of the University of Georgia,” commented Charles Davis, dean of Grady College. “He is the greatest Bulldog of them all, and always will be. He will always be a point of pride for Grady, and he will be honored forever by the Magill Professorship in Sports Communications, which we are working to create with a Who's Who of Bulldog greats.”

Grady College announced the effort to endow a professorship and eventual chair in Coach Magill's honor last fall with a tribute to him at the Grady Fellowship dinner.

“Coach Magill was touched by the idea,” said Davis. “I am glad we were able to share with Coach that we wanted to honor his legendary coaching, sportsmanship and love of UGA through teaching, research and outreach in his name. After all, coaching is probably the best metaphor for teaching.”

Daniel Hamilton Magill, Jr. was born in Athens, Georgia, Jan. 25, 1921. At UGA, Magill majored in Journalism and minored in Physical Education. He was a member of the swimming and tennis teams where he was named captain-elect in 1942, but no schedule was played because of WWII.

In 2005, Grady College honored Magill with the John Holliman Jr. Lifetime Achievement Award. Magill was inducted as a Grady Fellow in the 2008 Inaugural Class, at which time he recalled his experience at Grady College. “I majored in Journalism at Georgia because my father and both grandfathers were newspaper editors: father, Daniel H. Magill (The Athens Banner-Herald), and grandfathers, James T. Magill (The Hartwell Sun), and Eugene Winston Carroll (old The Athens Herald, which he sold to The Athens Banner, which then became The Athens Banner-Herald.) Also, in the early 1920s, my father suggested to the editors of The Atlanta Constitution and The Atlanta Georgian (Hearst newspaper not in publication now) that they use their influence to get UGA's new Journalism school named for a native Athenian and UGA graduate, Henry Woodfin Grady, later the nationally-famous editor of The Atlanta Constitution and noted orator.”

Following college, Magill served in the U.S. Marine Corps four years during WWII (1942-45) after which he wrote sports for The Atlanta Journal from March 1946 to August 1949. He joined the UGA Athletic Department, September 1, 1949, as Assistant Athletic Director for Minor Sports, also Sports Information Director. He originated The Georgia Bulldog Clubs in 1953, forming clubs in all 159 counties in the state. He served as men's tennis coach 34 years (1955-88); his teams winning the SEC outdoor team title 13 times and the NCAA team title in 1985 and 1987.

He brought the NCAA men's championships to Athens in 1972, and he originated the National Intercollegiate Tennis Hall of Fame in 1983. Its permanent home is adjacent to the UGA tennis complex named for him.

In May 1945 he married the former Rosemary Reynaud of New Orleans, whom he met on the UGA campus. They have three children: son, D.H. Magill III, and two daughters, Sharon Brown and Mollie Sloan.

Contributions from alumni and friends in Coach Magill's memory to the Magill Endowment Fund at Grady College can be made by check made out to the UGA Foundation for the Magill Endowment for Sports Communications or online. For information, please contact Parker Middleton at 706-542-1704 or jparker.@uga.edu.

For additional remembrances of Dan Magill, please read the tribute by Chip Towers from the Atlanta Journal-Constitution, or the tribute written last May by Loran Smith, and re-published in the Athens Banner-Herald.