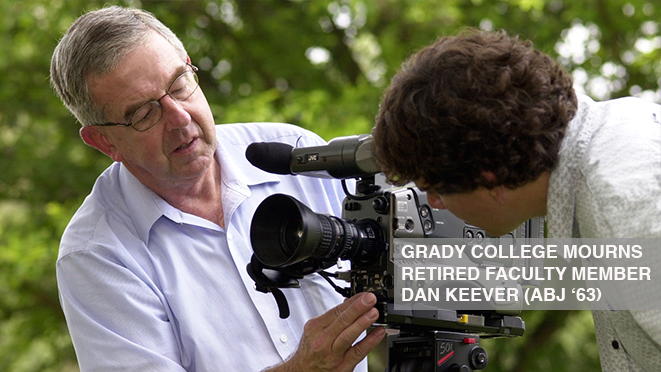 It is with heavy hearts that alumni, faculty and friends of the Grady College mourn the March 28 passing of retired faculty member Dan Keever (ABJ '63).

Keever made a great impact in his more than 10 years at Grady and three decades in the news business.

“Dan  Keever was a gift to the lives of everyone lucky enough to know him, especially to the decade of students he taught at Grady,” said Ann Hollifield, professor of telecommunications. “The consummate journalist, he covered many of the most important stories of our era during his 30+ years in the Atlanta television news market, casting light into the dark corners of our times.  But as you would expect from such a humble, self-effacing man, he did it from behind the camera, never seeking the spotlight for himself.  Though most of his audiences never knew his name, he made the world a better place through his work, but even more through who he was — an endlessly ethical, honorable, warm, kind and caring man.

“The impact he had on his students is clear from the way they have filled social media and the airwaves of Georgia's broadcast stations this weekend with tributes to him,” Hollifield added.

David Hazinski, associate professor of telecommunications, described Keever as a “go to” guy.

“You’d go to him if you weren’t sure what was needed or how to get something done, and he’d figure it out and get it done,”  Hazinski recalled. ” He had this huge mental inventory of knowledge, particularly natural things. He could tell you what kind of plant something was or when to harvest peanuts.

“He absolutely loved students and had to struggle with himself to grade them fairly… which sometimes meant poorly. But he knew they’d be better off for it, which is why he was fair,” Hazinski continued. “He was always there to help them and maintained relationships with some years after they graduated. He was also one of the nicest people on the planet. I think of him smiling, never cranky. We will all miss him.”

The following obituary was posted on the Athens Banner-Herald website:

James Daniel “Dan” Keever, 73 of Athens, passed away Saturday, March 28, 2015. Born in Rome, Georgia to J. D. and Maryann (Montgomery) Keever, he served as a Captain in the U. S. Army in Korea. He worked at the Georgia State Department of Game and Fish, and also at WAGA Channel 5 as a Photojournalist and a reporter for 33 years. He taught at the University of Georgia in the Grady College of Journalism and Mass Communication. He is survived by his wife; Vickie of 46 years, and his two sons, Brian and Mark. In lieu of flowers please make donations to the Salvation Army. A memorial service will be held Wednesday, April 1 at 3 p.m. at A. S. Turner & Sons. The family will receive friends on Tuesday, March 31 from 7 p.m. until 9 p.m. at A. S. Turner & Sons Funeral Home and Crematory.