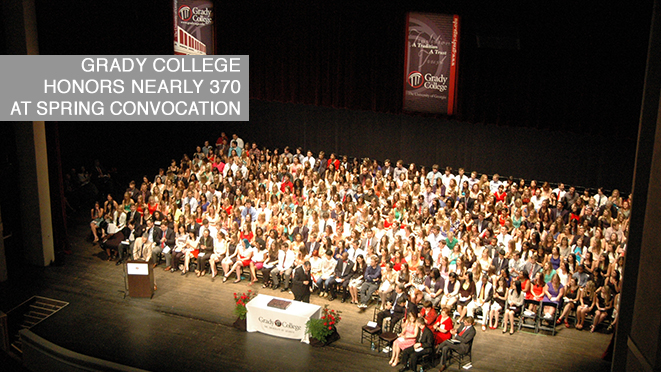 Note: Pictures from the Spring 2014 convocation can be viewed here:

Nearly 370 students were celebrated May 8 at the annual Grady Spring Convocation ceremony at the Classic Center Theatre in Athens.

Students graduating included 36 graduate students and 334 undergraduates—98 with an advertising degree, 83 with a degree in public relations, 59 from the journalism program, 41 who studied digital and broadcast journalism, and 53 with a mass media arts degree.

Charles Davis, presiding in his second convocation since becoming dean in July 2013, provided an overview of Grady’s accomplishments this past year and commended the students for their hard work, passion, and academic excellence.

“Our students have indeed covered themselves and their college with honors,” Davis said. “They have won prestigious national and regional competitions in advertising, journalism, public relations and telecommunications. They have laughed.  They have cried.  They have stretched. They have stressed. They are ready.”

Vice President for Public Affairs and Communication at Coca-Cola Scott Williamson (MMC ’92) gave the keynote address, stressing the importance of embracing the now, thinking about what is personally valuable, paying attention to the details, and working with passion.

“Sometimes the best reward for a job well done is simply to have done it,” said Williamson.

Williamson has directed PR initiatives for virtually all of the company’s brands and sports and entertainment properties. He manages teams of professionals in Atlanta and New York responsible for creating and executing PR campaigns for all of Coca-Cola North America’s brands.

Jinks and Nichelson praised the faculty and staff of Grady College, friends, and family members for their support and encouragement. They talked about the stereotypes of growing up in a millennial generation, and the benefits of being part of the social media revolution. At one point they paused to gather Williamson, Davis and a group of graduate students together for a selfie.

Most importantly, they issued a challenge for the graduates.

“Regardless of what your major is, essentially we all have one common purpose…we tell stories,” said Nichelson.  “Today is only part of our story.  These past few years are simply one small chapter in a volume of work, much of which is still unwritten.  No matter what challenges and obstacles you have to overcome, I challenge you to never stop telling your story. Keep writing it, keep telling it and make it a good one.”

Eric NeSmith (ABJ ’02), chair of the Grady Society Alumni Board, capped off the list of speakers by welcoming the students to the alumni ranks of the college and challenging them to keep in touch and stay involved.

Davis the day with a reverent message of being a Georgia bulldog.

“If, perchance, in their infancy they did not bark before they talked, we have taught them that, at least at Grady, English is a second language,” Davis said.

Little did he know that the soon-to-be graduates already knew this as evidenced by their own rallying chant before hitting the stage, led by advertising major Rance Nix.