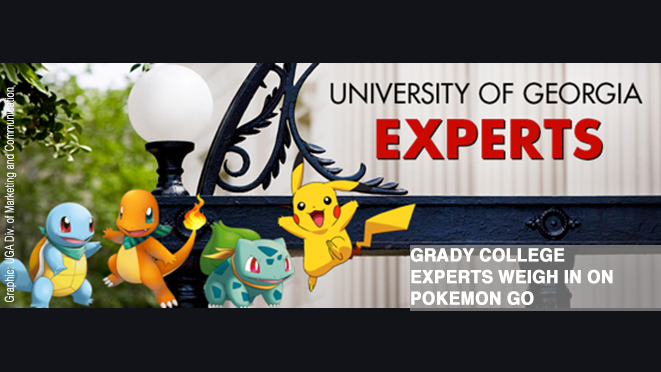 There is no doubt that students know a lot about “Pokemon Go.” However, there are some University of Georgia faculty who know about the location-based game, too.

Grady College faculty members Shira Chess and Sun Joo (Grace) Ahn have been sharing their knowledge about the game as media have asked for comments and authored articles.

Chess, an assistant professor in the Department of Entertainment and Media Studies, has studied similar games for several years and has published papers on Ingress, the game on which “Pokemon Go” is based.

Each have been included in several recent articles about the game including the following:

Life with Gracie: ‘Pokemon Go’ is just a new twist to an old favorite, article in The Atlanta Journal-Constitution quotes Chess on August 11, 2016. “It has a lot of cute little characters,” Chess said. “It also has this broad millennial appeal. Because many of them grew up with Pokemon, it has this built-in nostalgia to it.”

Pokemon Go Is AR’s Foot in the Door to Our World, article authored by Ahn for IEEE Spectrum on August 1, 2016. “… the launch of Pokémon Go will mark a place in history, and it is likely to influence the direction of game development and player interactions for years to come.”

Pokémon Go May Not Truly Be Augmented Reality, and That’s OK, article on UnDark quotes Chess on July 21, 2016. “We are hitting a point where we’re inseparable from our phones, she said. The little screen has become “part of our bodies, and it is part of how we respond to the world.”