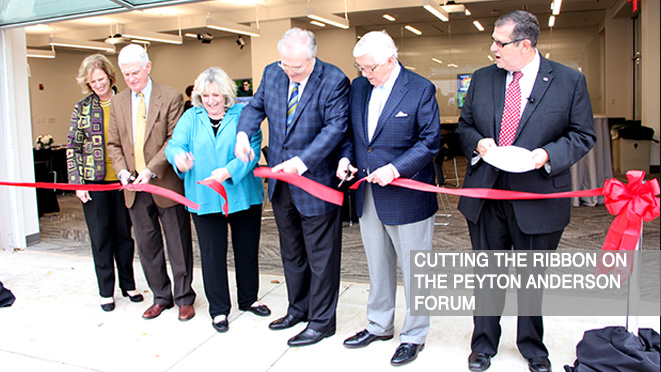 The Henry W. Grady College of Journalism and Mass Communication dedicated the Peyton Anderson Forum in ceremonies on Dec. 2 in Athens.

Named in honor of late civic leader, publisher and philanthropist Peyton T. Anderson Jr., of Macon, Ga., the forum was made possible by grants of $500,000 from the Peyton Anderson Foundation and additional funds from Tom and Edwina Johnson.

Tom Johnson, a 1963 alumnus of Grady College, former chairman and president of Cable News Network (CNN) and former president and publisher of the Los Angeles Times, delivered the dedication lecture, “A Tribute to Peyton Anderson.”

“The University of Georgia is grateful to Tom and Edwina Johnson and the Peyton Anderson Foundation for their roles in establishing this valuable learning and meeting space for students, faculty, alumni and guests,” said UGA President Jere W. Morehead. “Generations of students will benefit from this enhancement to the learning environment.”

“The creation of this space and its naming for Peyton Anderson continue a story of generosity that began decades ago with the scholarships Mr. Anderson provided to Tom Johnson to attend Grady and later Harvard Business School,” said Charles N. Davis, dean of Grady College. “Tom and Edwina Johnson created the Peyton Anderson Scholarship at Grady in gratitude to him and have led the Peyton Anderson Forum project as an extension of that gratitude,” said Davis.

“We are honored to have a forum in the center of Grady College that carries the name of Peyton Anderson,” continued Davis. “Great names evoke great stories. Without Peyton Anderson, would Grady College, would CNN, would quality journalism for a global society have had a Tom Johnson?

“We are grateful that Tom walked into the former reading room at Grady a couple of years ago and said, ‘get me a proposal to transform it into a place that excites, welcomes and inspires.’ Today we celebrate a remarkable, light-filled space that opens onto the Grady lawn, connects students visually to our beautiful campus and provides a place for them to work together, to welcome professional guests and to meet with learning partners,” said Davis.

“Along with Tom and Edwina, Grady College thanks Peyton Anderson Foundation Chairman Dr. Kirby Godsey and President Karen Lambert for their support of the project,” said Davis.

“We are grateful to tell the story of generosity and gratitude the Peyton Anderson Forum symbolizes, from Peyton Anderson to Tom and Edwina to the trustees of the foundation and now to students who will use this wonderful resource.”

Johnson, a Macon native, credits his opportunity to attend the University of Georgia and his career to Anderson’s financial and personal support. Johnson was 14 years old when he started working nights and weekends as a sports stringer at The Telegraph, the paper Anderson owned along with the Macon News.

While a student, Johnson was editor of The Red and Black, commander of Sigma Nu fraternity, a lieutenant colonel in the Army ROTC and a member of Sphinx. He covered the desegregation of the University of Georgia in 1962 while commuting on weekends to Macon to work at The Telegraph.

After graduation, Johnson was provided a second scholarship by Peyton Anderson to attend Harvard Business School. He earned his MBA in 1965, won a White House Fellowship, became deputy White House press secretary in 1967 and was appointed executive assistant to former President Lyndon B. Jonson in 1969. He served as editor and publisher of the Dallas Times Herald and president and publisher of the Los Angeles Times before going on to shape journalism in the modern age of 24-hour news at CNN.

Johnson has been married for more than 50 years to his college sweetheart, the former Edwina Chastain of Athens, a former Athens High basketball star whom he proposed to in the offices of The Red and Black.