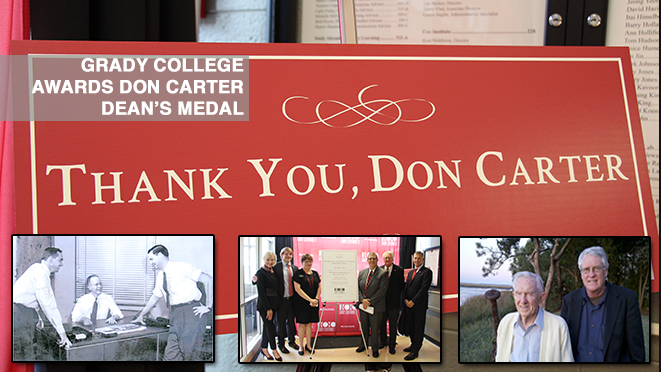 Don E. Carter (ABJ '38) has been awarded the Dean's Medal for Leadership Excellence by the University of Georgia Grady College of Journalism and Mass Communication.

Charles Davis, dean of Grady College, made the announcement Oct. 2 during the launch of the Grady College Centennial Celebration at a public concert by Freedom Sings before an audience of more than 500 people.

The Dean's Medal, the college's highest honor, was awarded to Carter in tribute of his career of leadership in journalism, including long-time support for journalism education at the Grady College.

“Don Carter is a stalwart of journalism excellence and an extraordinary alumnus,” Davis said. “We are honored to present the Dean's Medal, expressing our respect and appreciation for Don Carter's distinguished career as a journalist and news executive and his decades-long support for Grady College.”

Don Carter, former vice president of Knight Ridder and past president of the Grady College Alumni Board, recently made an additional cash gift and bequest to endow the mission of excellence of the journalism program at Grady. The Carter gift provides the college's first endowment of a departmental mission.

“The University of Georgia congratulates Don Carter on receiving the Dean's Medal and deeply appreciates Mr. Carter's commitment to journalism, the bedrock discipline on which Grady College was founded in 1915,” said UGA President Jere W. Morehead. “Journalism is essential to informed public discourse in our democracy and in our University. Mr. Carter's gifts imbue journalism education at Grady with the Carter stamp of excellence and make the University of Georgia an even greater university.”

Speaking from his home on Sea Island, Carter said he is “honored to be a graduate of the Grady College and its strong and dedicated College of Journalism and Mass Communication. I salute the college on its 100th anniversary.

“In 1936, I convinced my father that studying journalism at the University of Georgia was worth his investment of $500 a year to send me to Athens,” Carter said. “Journalism has provided me with a rewarding career as a journalist and news executive. I am pleased I can support students and faculty to preserve and advance journalism excellence in Grady's next century.”

Janice Hume, professor and head of the Grady Department of Journalism, said the endowment is “a landmark provision for Grady that will benefit students, faculty and the journalism program forever.

“Complementing the work of the Carter Chair, Mr. Carter's gift will allow the journalism program to reach new heights,” Hume said. “Immediately, it will be put to work to prepare students to enter prestigious journalism competitions. It will support students on internships in cities where the cost of living is high, and it will bring journalism leaders to campus in the Carters' names. The gift will allow journalism students and faculty to participate in programs marking Grady's Centennial. Funded by the Carter gift, a highlight of the Centennial weekend April 16-19 will be the inaugural Carter Symposium on sustaining strong journalism.”

On Oct. 3, the College announced that the dean's offices at Grady College would be named for Carter, dedicating the Don E. Carter Executive Suite in a ceremony attended by Grady's alumni board, faculty, students and guests.

“What a privilege it is to walk through these doors, to work and welcome students and guests everyday into the Don E. Carter Executive Suite,” Davis said.

Professor Kent Middleton, former head of the Journalism Department, who has served with Carter for many years on the Red & Black board of directors, said it will be inspiring to see Carter's name permanently in the halls at Grady. “Each time I walk by,” Middleton said, “I will be reminded of Don's advocacy for the basic values of excellent journalism: accuracy and fairness on issues of public importance.

“As vice president for news at Knight Ridder, Don was the voice of news for the finest newspaper chain,” Middleton said. “It is fitting to dedicate these offices to our friend Don Carter and to know that Grady's tradition of journalism excellence will be forever advanced by the Don and Carolyn Carter endowment.”

Carter was born and raised in Plains, Georgia, the first cousin of former President Jimmy Carter. Don and his wife-to-be, Carolyn McKenzie, a pioneering photographer, graduated from Grady in 1938 and 1940 respectively, and began work for then-competing Atlanta newspapers, Don for the Atlanta Journal and Carolyn for the Atlanta Constitution.

During his career Don Carter reported, edited and managed newspapers in Macon, Atlanta, New York, Washington and Miami. He serves on the board of the Warm Springs Foundation and the on the board of directors of the Red & Black where he served as editor in chief during his student days.

“What Don Carter has provided on the threshold of Grady's Centennial is a powerful statement of confidence in his beloved UGA, and in Grady College, its students and its future,” Davis said. “We are deeply moved and grateful. That Don Carter looks with such hope and commitment to the future should inspire us all on the eve Grady's second century.”

The concert at which the Carter announcement was made kicked off a year of programs and events celebrating the 100th anniversary of the Grady College.