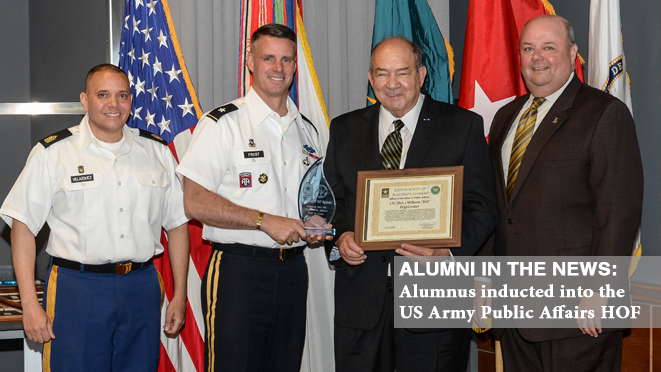 Richard William “Bill” Highlander (second from right) was inducted into the US Army Public Affairs Hall of Fame in 2016.

Richard William “Bill” Highlander (MA ’72), a retired lieutenant colonel, was inducted into the US Army Hall of Fame this past summer. Highlander was cited for serving the public affairs field with great distinction while making lasting and significant contributions to the profession and history.

Brigadier General Malcolm Frost, the US Army Chief of Public Affairs, inducted Highlander at the awards ceremony. Frost said Highlander served the Public Affairs field with great distinction while making lasting and significant contributions to the country, profession and history.

Excerpts of the ceremony commended Highlander for “exceptional and lifelong contribution to the career field’ that was “groundbreaking, enduring, and trailblazing.”

“I owe a lot to Grady and UGA for the start of a career and many experiences that led to the Hall of Fame recognition,” Highlander said of his honor.

While pursuing his masters in journalism at Grady College, Highlander worked at the Oconee Enterprise and was a Phi Beta Kappa.

“After a military and corporate career, I came full circle by becoming editor of the Evergreen Times, a community newspaper,” Highlander added. “Since then, I have authored or edited three books and I am continuing to write. Much thanks to Grady and UGA.”

The U.S. Army Public Affairs Hall of Fame was established in 2000 to educate and inspire the current generation of public affairs professionals. More than 50 individuals have been inducted into the Hall of Fame for exemplary efforts in peacetime and war, including service during combat operations in World War I, World War II, Vietnam, Korea, the Cold War, Somalia, Iraq and Afghanistan. General Frost said all should be inspired by Colonel Highlander’s dedication and exceptional service to Public Affairs, the U.S. Army and the United States.

A photo and biography of Highlander will be displayed at the Pentagon in the Office of the Chief of Public Affairs and at the Defense Information School in Fort Meade, Maryland.