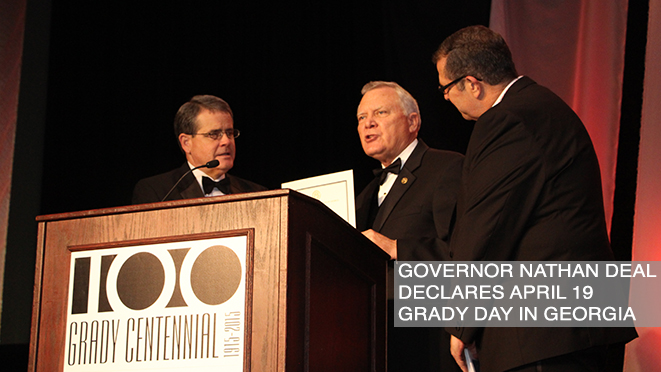 Deal, who addressed a sold-out crowd of Grady alumni, faculty and students at the Grady Centennial Gala April 18, invited University of Georgia President Jere W. Morehead and Grady College Dean Charles N. Davis to the stage as he handed over the proclamation.

“As Governor of the state of Georgia, I present to you a proclamation that signifies the excellence of education that has been embodied in the Grady school for now 100 years,” Deal said.

The governor’s remarks were filled with personal stories about how Grady alumni have helped shaped his life and career, and the impact that its alumni have had throughout the state.

“I think all of us know that our fellow Georgians, whether they know it or not, are often and almost daily touched by people who have come through the Grady College, and they provide the kind of knowledge and input and information that our people of this state depend on,” Deal said.

Deal spoke about Grady alumni who work with him including Brian Robinson (ABJ ’97), deputy chief of staff for communications; Krystal Drew, who helped prepare the proclamation; scheduler Courtney Brown (ABJ ’09); and his chief photographer, Andrea Briscoe (ABJ ’12). He also praised Grady Fellow Dick Yarbrough (ABJ '59), who is a member of the governor’s Education Reform Commission.

Perhaps Deal’s biggest laugh came when he mentioned his first cousin, Gloria Ricks Taylor (ABJ ’66), who is a Grady Fellow and serves on the Grady Board of Trust.

“Gloria has brought with her some of our other relatives and they are actually relatives, who unlike Gloria, actually voted for me,” Deal joked.  “I have noticed that Gloria’s viewpoint is also shared by some of your other alumni with whom I come in contact, especially in the Atlanta media.  So, Dean, I am a little concerned about some of the things you are teaching here.”

Deal also recognized Greg Bluestein (ABJ ’04) who reports on the governor’s office for The Atlanta Journal-Constitution.

Deal concluded his remarks with a challenge to current Grady students: “Even as we adapt to change, I hope there are some things that the Grady College will continue to teach our future communicators and that is the importance of objectivity, of fairness and accuracy and guarding against sensationalism.  We Americans can choose our own news sources and thereby increasingly have the ability to choose our own facts.  This endangers our democracy and it continues to polarize our electorate.  That is a dangerous trend, in my opinion.  I have faith that in this audience tonight, there are young students who will accept the responsibility that they have to educate and to inform their fellow Americans.  As the note above the door heading into Grady College says, they are indeed ‘Democracy’s Next Generation.’”

WHEREAS:       The University of Georgia’s Henry W. Grady College of Journalism and Mass Communication, founded by renowned Georgian Steadman V. Stanford, celebrates 100 years of excellence in 2015; and

WHEREAS:       The college was named for Henry W. Grady, editor of the Atlanta Journal Constitution who was known for using both his pen and voice to illustrate the dynamic new South that Atlanta, the State of Georgia, and the Southeast region had become; and

WHEREAS:       The Grady College affords its students ample and unique educational opportunities with many notable departments, including Journalism, Advertising and Public Relations, Mass Media Arts, and more. It is also home to many prestigious centers, institutes, and programs of great cultural significance, including the Peabody Awards which honor distinction in storytelling and are the most coveted awards in electronic media; and

WHEREAS:       The Grady College is lauded for its research, legendary educators, and outstanding service to the State of Georgia and the world through committed faculty, ambitious students, and the 22,000 alumni working around the globe in various positions of leadership and trust; and

WHEREAS:       The Grady College has educated generations of engaged citizens whose names loom large in history as well as the future of this great state; and

WHEREAS:       In the last century, the Grady College has shown a dedication to the highest standards of the journalism and mass communication professions, becoming a leader for other schools to follow. I am confident this remarkable institution will continue its commitment to truth, accuracy, fairness, curiosity, creativity, and effective communication; now

THEREFORE:   I, NATHAN DEAL, Governor of the State of Georgia, do hereby proclaim April 19, 2015, as UGA’s GRADY COLLEGE DAY in Georgia and congratulate and commend the students, faculty, staff, alumni, and friends of this storied institution for its success and many contributions to our state.