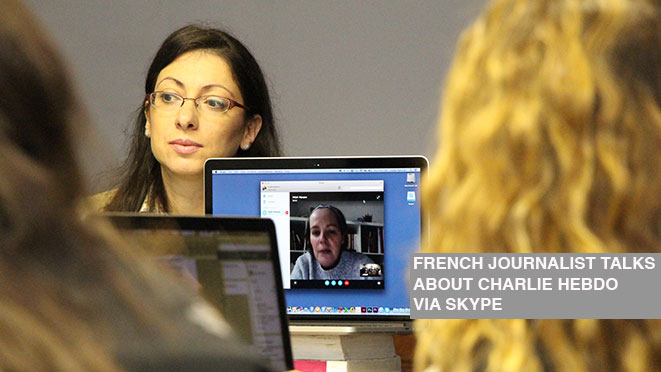 Students in Ivanka Pjesivac’s Digital and Broadcast Reporting class didn’t have to go far this morning to get a personal perspective of French journalism following the Charlie Hebdo attack. The students interacted via Skype with Stephanie Maupas, a freelance French journalist working with Le Monde, France 24 and BBC Africa. She is stationed in The Hague, Netherlands, and is a friend of Pjesivac from the time they both worked as journalists in that region.

Maupas discussed the tragedy and the way French journalists are different than American journalists. In France, she explained, journalists have a long tradition of satire. Satirical journalism is used with the intention of making people laugh. The Charlie Hebdo publication was started in the 1960s around the time citizens were revolting over issues of increased rights and more freedom of expression. The publication was banned in France a few times over the years for being too provocative with its coverage of the government, but it was always renewed.

French journalists are also against major governmental and civic institutions.

“We are always making jokes about the French police, French judges, etc.” Maupas said. “To mock them, in general, is a tradition and deep in the French culture.”

Pjesivac coordinated the interviews with both of her classes on short notice because she felt it was important for her students to hear first-hand about the tradition of satire in France and what it means for French journalists to raise the limits of freedom of the press.

Maupas answered student questions ranging from what France is doing right now to prevent terrorism and how the attack affected French journalists, to whether there should be a limit to the freedoms that journalists have.

“In my view, ‘no,’” responded Maupas to the question whether a limit of freedoms were necessary. “The government fights against journalists sometimes, but we are free to go where we want.”

She also talked about the support that French journalists have for Charlie Hebdo, the security measures they are taking and the nationalistic pride all French citizens are experiencing as the result of the attack.

Maupas also responded to questions about the recent statements by Pope Francis that there are limits to freedom of expression, especially when it insults someone's faith. The Pope defended it as a human right, but said there are limits.

Maupas said she was disappointed in his “freedom of expression, but…” response.

“There are limits in every country and blasphemy is not a crime in France,” said Maupas. “The line is when you put people in danger or your intention is to target somebody. Personally, I don’t understand how a cartoon can hurt somebody. It’s only a cartoon and people have the freedom to buy something (the publication) or not.”

For Alexander Contreras, a junior majoring in broadcast journalism and a student in the class, hearing what she said had an impact.

“You can speculate, but it was fascinating to hear that perspective.”