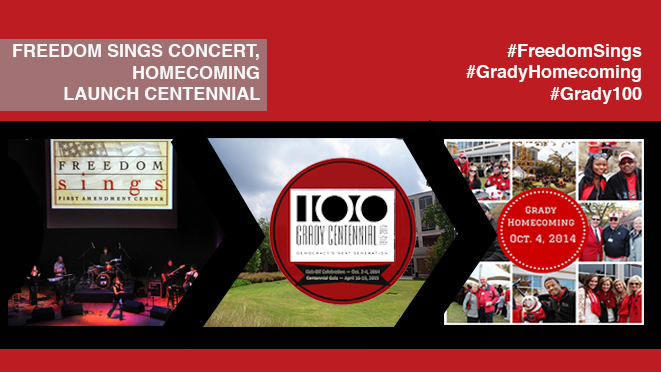 It’s been a century in the making and the launch of the Grady College Centennial celebration is finally here.  The feature events include a concert by the group Freedom Sings Oct. 2 at 7 p.m. at The Classic Center and the Homecoming tailgate Oct. 4 two hours before kickoff on the Grady Lawn.

“Homecoming always is a stellar event at Grady, but this year we will reach new heights,” said Charles Davis, dean of Grady College.  “From the concert by the award-winning Freedom Sings to our legendary tailgate, we will launch our centennial year with the appropriate level of fanfare. This will be a weekend to remember!”

There is no charge for the Freedom Sings concert, but tickets are required.  Visit The Classic Center box office or call 706-357-4444 to reserve tickets.

Meal tickets for the Homecoming tailgate are $25 each (no charge for children under 5) and should be reserved by Sept. 25.  Visit Grady’s Homecoming web page for more details.

Based out of Nashville, Freedom Sings comprises several award-winning recording artists playing songs that have at one time been censored. Between songs, Ken Paulson, founder of Freedom Sings and former editor of USA Today, tells the story of the censored tune.

“Freedom Sings is a unique concert experience, bringing together award-winning recording artists, energetic rock, pop and soul music and a celebration of free speech in a fast-paced and interactive show,” Paulson said. “Educators applaud its innovative and inspiring approach; young audiences are entertained and engaged throughout.”

Musicians scheduled to perform include:

Grady College proudly welcomes back its alumni, faculty, staff and friends for the annual Grady Homecoming tailgate.  A barbecue meal, cash bar, band and children’s games provide the festive atmosphere on the Grady lawn two hours before kickoff of the Homecoming game versus Vanderbilt.

In recognition of Grady’s Centennial celebration, alumni are invited to bring copies of their favorite photographs or upload them for the historical photo archive.

Videographers will also be on site to document reflections from alumni.  Interviews about favorite Grady memories, what being a Grady graduate means, and visions for Grady’s future will be recorded for the future Centennial online video archive.

The Centennial celebration will feature events through its anniversary year, 2015, and includes the 100th Birthday Field Party and Centennial Gala April 16-19, 2015, and a series of receptions in cities around the country.  A Centennial website, generously designed by Red Clay Interactive as a gift-in-kind, will be unveiled before the Centennial launch at the end of Sept. at Grady100.uga.edu.

Sponsorships recognizing Grady’s contributions to journalism, mass communication, public relations, advertising and business are available and can be viewed at the sponsorship website.