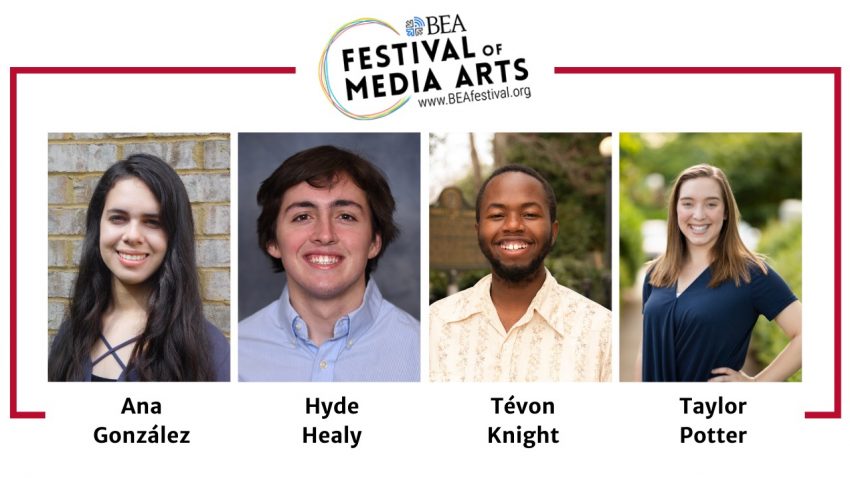 Editor’s Note: Taylor Potter and Ana González are BEA Best of Festival winners. Their television pilot script won out of all first place winners in the student category. They will split the $1,000 prize.

The BEA is the premiere international academic media organization driving insights, excellence in media production and career advancement for educators and students. The competition receives over 1,500 submissions representing students and faculty from schools around the world.

Potter and González developed their television pilot, “Buyer’s Remorse,” in Professor Matthew Evans’ writing for television course, which was launched last semester. The show depicts the perils of a realtor who, desperate to make a mid-career comeback, resorts to dealing drugs to save her family from foreclosure but becomes the catalyst for her family’s destruction.

The course’s emphasis on peer collaboration allowed Potter and González to refine their work, and it taught them important lessons on story, character and conflict.

‘“Buyer’s Remorse” seeks to discover the lengths to which a mother and wife would go to save and protect her family at the expense of herself and her career,” they said.

The moment the “Buyer’s Remorse” team learned of their award.
Healy’s pilot script for the show “Command Sandwich” showcases his passion and skill for writing. Healy wrote the pilot before taking classes in the EMST program. His sister Isabella, who studied cinematic arts at the University of Southern California, played an active role in providing feedback for the script’s first draft, Healy said.

“I used my dysfunctional workplace experience in food service as the basis for this pilot. I love comedy, and my dream job is to write comedy professionally, so I thought I’d used the time granted while the world was shut down to write this pilot,” Healy said.

He credits involvement in clubs like The Industry and Sharkwing Sketch Comedy for exposing him to student work and inspiring him to write the pilot.

Knight also received an award of excellence for his one minute campaign video of Brianna Hayes, a candidate for UGA Student Government Association president in 2020.

“In the span of about 72 hours, I directed, shot, and edited the project together,” Knight said. “I think this award was a true confidence boost. BEA is not easy to compete in because colleges across the nation send in high-quality pieces.”

One key element Knight took away from his Grady classes is the necessity to devote all of himself to the project in order for it to feel authentic and be effective. The shooting styles and compositions used in the video were techniques he learned in Professor Garland McLaurin’s cinematography class, Knight said.