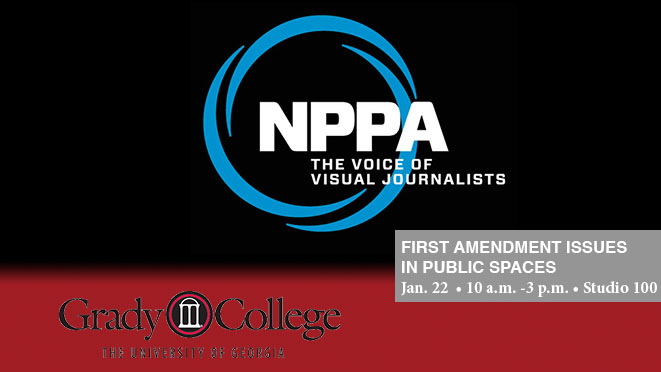 Based on incidents last month at the University of Missouri, Smith College and other campuses – as well as at other public settings – NPPA believes there is a significant need to facilitate a broad conversation on the First Amendment rights of citizens and journalists.

As a result, the association – in collaboration with the Grady College of Journalism and Mass Communication at the University of Georgia (site of NPPA’s headquarters) – will host a five-hour symposium on Friday, Jan. 22 that discusses current situations in order to better educate and inform all parties on their rights and responsibilities when covering or participating news events in public spaces.

The sessions take place in the Peyton Anderson Forum beginning at 10 a.m.

There is no registration fee to attend the program due to generous financial support provided by the Sinclair Broadcast Group. To register, go here.

Grady College Dean Charles N. Davis, who will moderate one of the sessions, underscored the importance of the program. “Recent events remind us of the critical need for defending bedrock First Amendment principles and for explaining the importance of delineating the rights of visual journalists in the field. The symposium’s discussions will focus attention on these immovable principles.”

Bill Lee, professor of journalism, will moderate the opening session along with student journalists Tim Tai and Mark Schierbecker and CNN’s Samira Jafari. Tai and Schierbecker were at the heart of the disruption on the Missouri campus that received widespread press and social media coverage. Jafari is editor on The Row, CNN’s editorial oversight team.

The program next will segue into a discussion on the rights that are at play in public spaces, and how schools can better educate and communicate with students, journalists and the community regarding where public spaces and privacy collide. Joining Davis in this dialogue will be NPPA General Counsel Mickey Osterreicher; Frank LoMonte, executive director of the Student Press Law Center; and Sonja West, an associate professor of law at the University of Georgia law school and a specialist in constitutional law, media law and the U.S. Supreme Court.

Osterreicher noted that, “We thought the unfortunate incident at Missouri should be used as a teachable moment. With the support of Sinclair Broadcast Group, the NPPA-Grady College program will be just that. It will inform students, faculty and the public as to the rights of others. It also will provide all who attend with some very tangible and useful takeaways.”

The luncheon will feature a keynote speaker, Joe Johns from CNN’s Washington, D.C., bureau, offering a journalist’s perspective on the changing nature of covering news events and the public’s perception of First Amendment protected rights.

The symposium will conclude in the afternoon with a crowd-sourced participatory exercise facilitated by Kenny Irby, most recently with The Poynter Institute. Irby will guide all attendees and speakers through the process of finding answers to important questions that arise in volatile situations in public spaces – and will also offer tips, best practices and other key things to know when covering public events.

Mark E. Johnson, a senior lecturer in photojournalism at Grady College, the chair of NPPA’s Education Committee and the overall coordinator of the symposium, added that the morning panel discussions and luncheon speaker will be recorded and edited recordings posted on the NPPA website. Other collateral material from the day’s program also will be uploaded to the site.

Johnson emphasized the value of the free symposium to all NPPA members and other interested parties. “The mantra of ‘plain view from a public place,’ which visual journalists have lived by for years when it comes to what can and cannot be photographed, is being questioned,” he said. “We need to have a very public conversation on both what we legally can document and what, ethically, we should document.”

“The rise of conflicts on college campuses and town commons is indicative of two problems: first, that our fellow citizens do not understand the First Amendment and, second, that we, as journalists, are losing the trust of those same citizens,” he said.