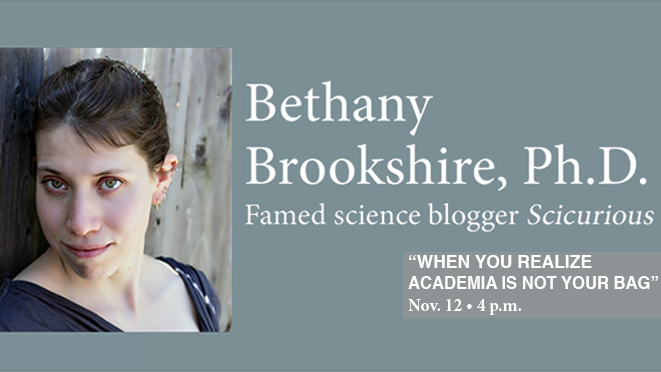 On Twitter, @scicurious has more than 33,000 followers and the same number of tweets. But there's no headshot, just a vivid color picture of a brain scan.

Neuroscientist Bethany Brookshire, Ph.D., kept her real identity a secret during her rapid ascent to the upper echelons of science blogging. Accolades piled up and eventually she went public as a science writer and tipster for other scientists seeking alternative careers.

“Getting out alive: what to do when you realize academia is not your bag, baby,” is the title of the lecture and discussion Brookshire will present on Nov. 12 at 4 p.m. in MLC room 350.

Today Brookshire is a science education blogger for Science News for Students. She is widely known for her blogging and videos for Eureka!Lab and Scicurious, covering science by and for young scientists. Her writings cover a range of topics from neuroscience to biomedicine and psychology, always in an educational yet approachable manner.

She is the editor of “The Open Laboratory Anthology of Science Blogging, 2009” and the winner of numerous awards including the Society for Neuroscience Next Generation Award and the Three Quarks Daily Science Writing Award. She has broad portfolio academic writing credits and is also the editor of a new book to be published in 2015, the “Complete Guide to Science Blogging.”

Brookshire has a Bachelor of Science in biology and a Bachelor of Arts in philosophy from The College of William and Mary, and a Ph.D. in physiology and pharmacology from Wake Forest University School of Medicine.

Brookshire's talk at UGA is co-sponsored by the Health and Medical Journalism program at Grady College, the Biomedical and Health Sciences Institute, the Department of Computer Science, the UGA Graduate School and the Integrative Conservation Ph.D. (ICON) program.