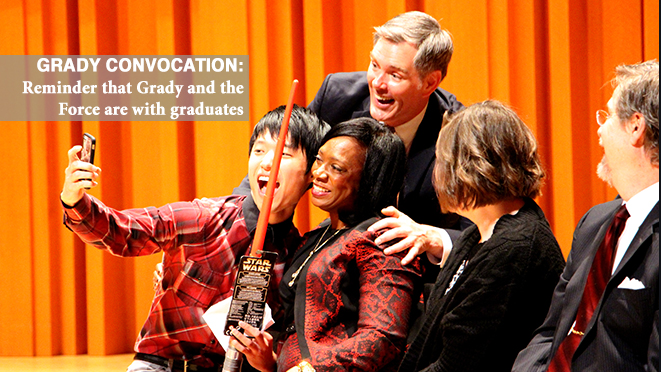 Pictures from the Fall 2015 convocation can be viewed on the UGA Grady Flickr gallery:

Almost 150 students were recognized at the Fall 2015 convocation December 17, 2015, at the Hugh Hodgson Performing Arts Center.

The ceremony, including the keynote address by Carole Jackson Munroe (ABJ '82), was filled with references to the opening of the much-anticipated movie, “Star Wars: The Force Awakens.”

Students graduating from Grady this fall included one Ph.D. student, six master’s students, 41 students with an advertising degree, 26 with a degree in public relations, 39 from the journalism program, 19 who studied digital and broadcast journalism and 17 with a mass media arts degree.

Dean Charles Davis presided over the ceremony, giving an overview of Grady’s accomplishments this past year and praising the students for their hard work, passion and academic excellence. He also recognized the tremendous Grady spirit and pride displayed during the centennial celebrations the past several months.

In her charge to candidates, Munroe, director of public relations for Walt Disney World Resort, focused on the themes of unboxing creativity, much as a toddler does.

“Unboxing is about exploration — taking time to get to know what’s inside,” Munroe said.

She provided advice on several ways to think like a toddler including how to keep it simple, take time to anticipate something new, embrace the simplicity of finding joy of new discoveries, replace fear with anticipation and be open to new cultures and people.

She concluded with her own example of unboxing her creativity with respect to the opening of the new “Star Wars” movie.

With the help of two Grady Ambassadors, she unwrapped two boxes of movie merchandise.

The new character of Finn Parlant, she said, represented authenticity and showed how the character was insecure but went on to self-discovery.

“The smartest thing you can do is trust yourself,” Munroe said.

She next drew out a light saber and she advised the graduates to always be armed.

Finally, she unwrapped the faithful character of Chewbacca representing friendship, who she said was dependable and trustworthy.

“Be that kind of friend and you will be reciprocated,” she said, “but remember that blind allegiance will take you to the dark side quicker than anything.”

In her concluding remarks, she reminded the graduates that they are not alone.

The distinguished senior orator, the student graduating at the top of her class, was Cecile Duncan from Claxton, Ga., a public relations major who also earned a music business certificate.

Bryan Harris (MA ‘03), chair of the Grady Society Alumni Board, concluded the platform of speakers by welcoming the students to the alumni ranks of the college. He encouraged the students of the centennial class to stay in touch with the college and give their time, experiences and talents to future students.