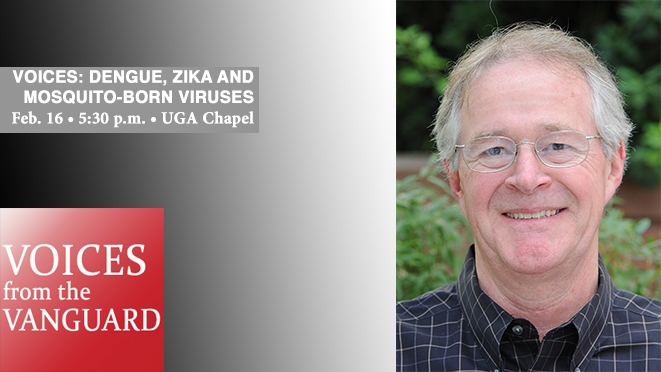 Dengue fever debilitates, sickens and even kills millions of poor people around the world every year – many of them young children. And the same mosquitoes that carry dengue also spread other high-profile viruses such as the Zika virus, the subject of a World Health Organization warning that pregnant women should avoid travel to certain countries for fear of severe birth defects.

Prevention programs typically distribute bed nets and dump out containers of standing water where disease-carrying mosquitoes breed. But extensive field research in Thailand and Peru has convinced entomologist and ecologist Thomas W. Scott that a more interdisciplinary approach could be more effective.

He’ll tell this story when he speaks at the University of Georgia on February 16, in a lecture called “The human factor: People, places and the fight against infected mosquitoes.” This is the second event in this year’s Global Diseases: Voices from the Vanguard lecture series.

The talk takes place at 5:30 p.m. in the UGA Chapel and is free and open to the public.

Understanding the complexities of pathogen transmission is essential for disease prevention, says Scott, who is Distinguished Professor of Entomology and Nematology at the University of California at Davis. He shares his research on the development of disease transmission dynamics, an approach that he says is “among the most promising frontiers for improved mosquito-borne disease prevention.” This involves combining insights from the social and biological sciences.

A leader in his field, Scott has directed epidemiological studies of dengue in Thailand and Peru to better understand transmission dynamics and innovative approaches to control. Although he’ll use dengue to explain these concepts, he’ll also discuss how they apply to zika and chickunguyna. Both these diseases are expanding their range and becoming greater threats.

“Tom Scott is passionately committed to using his scientific skills to reduce the burden of misery on poor people around the world,” said Patricia Thomas, co-organizer of the series and Knight Chair in Health and Medical Journalism at Grady College. “His research is especially timely, given global concern about links between maternal Zika infection and the birth of infants with microcephaly.”

Scott, who holds a Ph.D. in ecology from the Pennsylvania State University, completed his postdoctoral training in epidemiology at the Yale School of Medicine. He joined the faculty at the University of California at Davis in 1996 and has worked extensively in both Thailand and Peru. Scott heads an interdisciplinary team in Peru whose findings are changing how the dynamics of dengue spread are seen. He’s an advisor to the World Health Organization and is a leader of the Partnership for Dengue Control.

This marks the eleventh year for the global disease lecture series. Daniel G. Colley, professor of microbiology and director of UGA’s Center for Tropical and Emerging Global Diseases, shares the organizing with Thomas.

March 15—Claire Panosian, M.D., professor emeritus in Medicine/Infectious Diseases at the David Geffen School of Medicine at UCLA, will present about global travel and the spread of disease, and how being on call for cases of exotic disease in one major airport is a window on the world’s infectious scourges.

April 12— Sarah J. Schlesinger, MD, associate professor of Clinical Investigation at The Rockefeller University, will give the talk “Dendritic cells, HIV vaccines and the Nobel Prize: an amazing adventure.”

The February and March lectures will be followed by a free public reception in the UGA Demosthenian Hall.