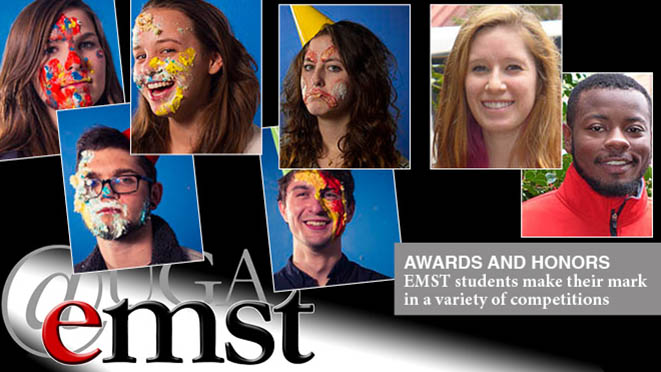 A film about a birthday party gone awry, a script about life’s changes with a supernatural twist and an emerging career in media management all earned EMST majors national recognition.

“We know our students are good,” said Jay Hamilton, head of the Department of Entertainment and Media Studies. “But this level of performance and accomplishment—and in such a range of areas—really shows what our students are capable of. I can’t be more proud of these achievements.”

Sarah Howard won First Place in the 2016 Festival of Media Arts for her script for an original TV-series pilot.

The festival competition is sponsored by the Broadcast Education Association.

Howard’s script was written as part of her coursework for EMST 3110, “Writing for Digital Media,” taught in her case by Shira Chess.

“Nova, Georgia” tells a story about a girl named Harley Watts escaping her old life and landing in a new one by mysterious and supernatural circumstances.

Tyrus Parks earned an invitation to the IRTS Atlanta Career Day, which took place in February at the Atlanta headquarters of Cox Media Group.

Selection occurred via a competitive-application process, with entries from students throughout the Southeast. The event combines a multicultural career workshop designed to provide insights into the latest changes in media industries with various opportunities to gain concrete career advice.

A film titled “Happy Birthday Kevin,” written and produced by five recent EMST grads, earned an Honorable Mention in the Student Video Competition for the 2016 Festival of Media Arts sponsored by the BEA.

The script was co-written by Trevor P. May and Connor Cuevas. In addition to May (Director) and Cuevas (Cinematographer), its crew consisted of Jillian Bass (Producer), Becca Bennett (Producer), and Anna Peace (1st AD).

The film project, which was written and filmed in Spring 2015, was the result of an independent study under the direction of EMST faculty member Jim Biddle. This darkly comic tale, which takes place at a 10-year-old’s birthday party, reveals that age does not dictate maturity even in the confines of white picket suburbia.