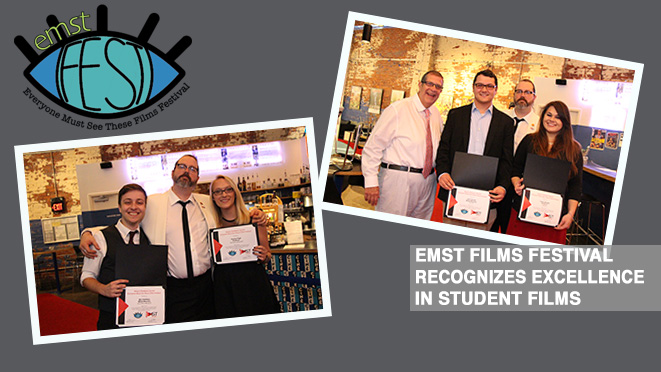 A variety of original films written and produced by Grady College students in the Department of Entertainment and Media Studies were screened as part of the Everyone Must See These Films Festival May 7-9, 2016.

The festival, previously known as Grady Fest, received a new name and a new venue at Ciné Theater downtown Athens, as well as a new format that included three evenings of screenings.

“The quality of the films is very professional and well put-together, especially since they are student films where everyone is raising their own funds and producing everything and writing everything,” said Idowu. “The cinematography is great. The writing is great. It has exceeded my expectations.”

“Dell’orto’s Werewolf” explores the revenge against a supernatural character after it wreaks havoc in a college town.

“Making the movie taught me a lot of about how to work with people” said Dell’orto of the movie he created. “One thing I definitely learned is that it’s valuable to have a crew that you can think of as family since that kind of relationship raises the stakes fro everyone involved, because everybody just wants everyone to look good.”

It is a pretty small group of students involved with the independent studies projects, and many of them overlapped working on several projects at the same time.

“Many of the other indie studies had writers or directors who were directly involved with “Werewolf,” said Dell’orto. It was an honor to win because I think they all went on to make some really great films and they made for some tough competition.”

“I believe this will prepare us for the future…for producing independent films,” said Idowu, who dreams of starting her own production company someday. “This was a priceless opportunity.”

More information about the films screened at the festival can viewed on the EMST Films Festival website.