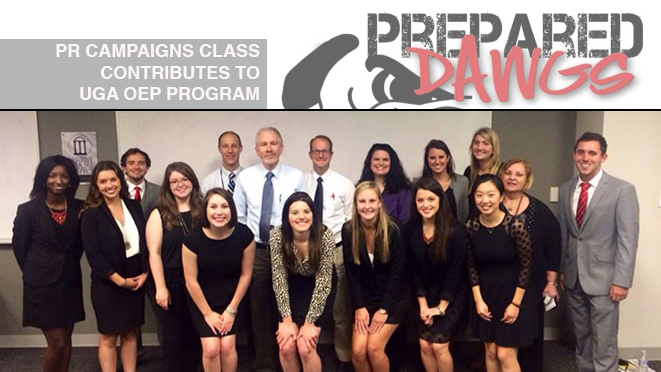 Events planned by UGA's Office of Emergency Preparedness to commemorate “National Preparedness Month” this September reflect the work of 44 PR Campaigns students from Grady College during the past two years.

Following the tragic Sandy Hook Elementary shootings and the Boston Marathon bombings, Lynne Sallot, professor of public relations, challenged her classes in spring 2013 and 2014 to work with UGA administrators to assess and improve emergency preparedness on campus.

Both classes conducted multiple focus groups with UGA students, surveyed students and faculty at UGA and analyzed emergency preparedness efforts and outreach at 46 of UGA's peer and aspirational universities. From their research, the students helped implement a number of improvements including streamlining the name of UGA's Office of Security and Emergency Preparedness to the Office of Emergency Preparedness (OEP), redesigning OEP's website, simplifying the URL to prepare.uga.edu and designing the “Guard Dawg” logo.

In addition, the students created an “Emergency Preparedness Week” this past spring, lined up presentations for OEP with Greek organizations this fall, created new-student orientation materials used this summer, and prepared prototypes for expanded social media and Web-based efforts to reach students, parents, faculty and staff. In addition, Grady College is among the first UGA units to have safety placards posted in all of its classrooms.

Grady College Dean Charles Davis commended the students for working with the Office of Emergency Preparedness as their class client.

“It has paid huge dividends on this campus and we are all better for it,” Davis said. “The experiential learning fostered by these sorts of collaborations is hugely important.”

Sallot, who serves on a faculty advisory board for OEP that was recommended by her students, said she plans to continue to have her PR Campaigns students work on improving UGA's emergency preparedness. Previously, long-term PR Campaigns student projects contributed to the establishment of UGA's Office of Sustainability and Office of Service Learning, as well as the Tate Center expansion.

Next semester she hopes her students will partner with OEP to sponsor emergency preparedness training seminars for faculty and staff, among other initiatives.

In the meantime, the Campaigns students' work so far will be helpful to an information fair that OEP is hosting from 10 a.m. to noon at Tate Center on Sept. 11 to mark National Preparedness Month. The fair will be followed by a presentation from 3 to 5 p.m. in the UGA Chapel by FBI agents who will share their professional and personal experiences from 9/11 in 2001 when the World Trade Center in New York was destroyed.

“I remember well sharing the shock and horror of 9/11 with my PR class before UGA closed at noon that day,” Sallot said.

Sallot's experience with emergency preparedness started as a senior during the tragic shootings at Kent State in 1970 and as a doctoral student at the University of Florida during the student murders in 1990.

“I just want all of us at UGA to be as prepared as possible for emergencies of every kind,” she said.