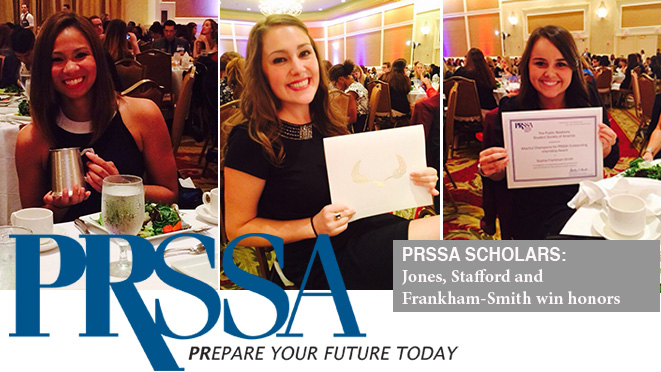 “Receiving this award is such an honor,” Jones said. “I feel extremely blessed and thankful for the acknowledgment of the work I’ve done to advance in this industry. The generosity of the sponsors is phenomenal and much appreciated.”

The honors for Jones and Stafford were given on the basis of their academic and leadership achievement, and each were awarded $1,000. Frankham-Smith was recognized for her professional ambition displayed during her internship with Children’s Healthcare of Atlanta last summer.

“Our chapter is incredibly passionate and hard-working,” Stafford said. “The students are savvy and tenacious, so it doesn’t surprise me that we came home with three great awards.”

Jones noted certain traits of the Drewry Chapter that set its members up for success. “Our chapter creates programs that lend to the development of its members,” she explained.

“We are uniquely focused on career and trade development in our programming, speaker choice and leadership opportunities, ensuring that members are aptly prepared to begin their career with confidence,” Jones continued.

The Drewry Chapter is consistently recognized at the PRSSA National Awards Banquet. Frankham-Smith’s honor marks the third consecutive year that a member has taken home the Altschul award. Carly Nash won the award in 2012 and Cody Nichelson won in 2013.

In addition to the recognition of these three students at this year’s PRSSA Conference, The Drewry Chapter was also named the host of the 2015 PRSSA National Conference in Atlanta in November 2015.

The John E. Drewry Chapter of PRSSA at the University of Georgia is the largest chapter in the world with more than 250 active members. Named after the Grady College of Journalism and Mass Communication’s first dean, it was founded at the University in 1969. Currently, Dr. Betty Jones is the faculty advisor and Katherine Strate is the professional advisor.