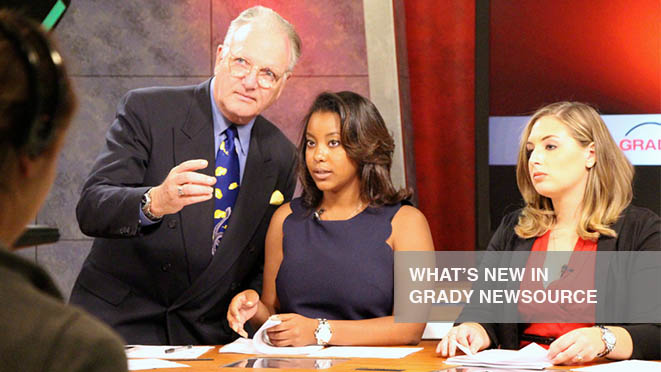 No longer does it resemble a 1980s newscast. Grady Newsource — a student production of the University of Georgia Grady College of Journalism and Mass Communication — has undergone some major renovations in recent months to bring it in line with, and even ahead of, major broadcasting networks.

The most significant change, according to David Hazinksi, Jim Kennedy New Media Professor and associate professor of telecommunications, has been the adoption of a “digital first” mindset, meaning news content is pushed out on the website and through social media outlets in real time.

Two new student roles were created to manage and produce the digital content: an audience engagement specialist, tasked with posting to social media and interacting with followers; and a digital producer, whose job is to curate multimedia stories produced throughout the day by other students and optimize the content for the web and mobile.

Big changes have also been made to the format of the half-hour newscast, which airs from 5 to 5:30 p.m. Monday through Thursday on UGA channel 15.1 and Charter Cable 181, and streams on http://gradynewsource.uga.edu. Instead of an all-live show, it is now a hybrid version of a modular production mixed with live elements. Watch the video below for more details.

In addition to the changes in production and workflow, Newsource has undergone a physical transformation. The newsroom was gutted over the summer and outfitted with new HDTV screens and a fresh coat of paint. The control room now boasts a state-of-the art NewTek TriCaster — a switchboard that allows toggling between live video feed, graphics and web streaming — among other new technologies.

“The major changes are just the start of a new journalism curriculum, new experimental technology, and increased experimentation to try to keep up with or lead rapidly changing trends in journalism,” Hazinksi said.

An advanced experiential learning course for broadcast and digital journalism majors, Newsource is taught to about 30 students each semester, divided into two classes: Monday/Wednesday and Tuesday/Thursday. Each week students rotate into different roles ranging from show producer and assignment editor to sports reporter and news anchor. An all-volunteer show staff about 80 more students assists in the production and technical support.

To learn more about Grady Newsource and to stream the latest newscast and after-show critique, visit http://gradynewsource.uga.edu.