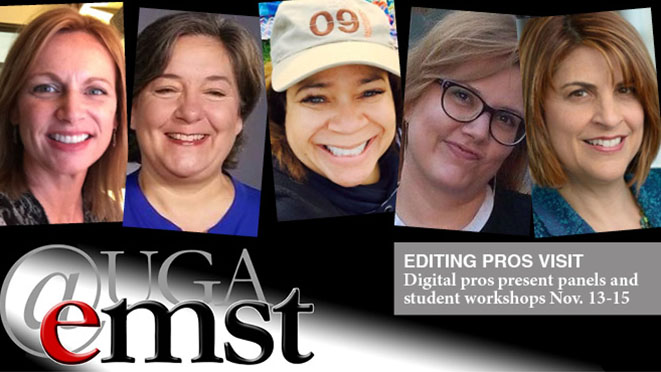 Professionals Amy DeLouise, Sue Lawson, Nicole Haddock, Shauna Campbell and Luisa Winters will talk about their work and careers in a number of panel discussions. Time has been set aside for one-on-one meetings with students and for working with students on their own projects.

Students interested in attending any of the program should fill out a brief online form.

The event is sponsored by the Hearst Visiting Professionals Fund, the Department of Entertainment and Media Studies, the UGA Filmmaking Union and The 136.

Noon – 1:30 p.m. (Studio 100): Panel discussion on working freelance, getting into the business, networking and rate cards.

Noon – 5:00 p.m. (Journalism room 136): One-on-one review of resumes or work reels. Also, panelists will be available to work one-on-one with students with their projects in-process.

Amy DeLouise has more than 20 years experience in digital content production, brand strategy, cause marketing, and social media channels. As an experienced director/producer, she has won more than 40 top national awards for creative excellence in video and multimedia production including the CINE Golden Eagle, New York Festivals and Telly Awards. She is a popular featured speaker and workshop leader for major national and international conferences such as the National Association of Broadcasters (NAB), the National Association of Independent Schools, Digital Media Expo, DRI (“The Voice of the Defense Bar”), Women in Film International and many more. DeLouise has received the prized Woman of Vision Leadership award from Women in Film & Video, on whose Advisory Board she now serves, and has been named a Washington Area Woman-Owned Small Business Leader by the Women’s Business Enterprise National Council.

Sue Lawson is an award-winning editor and videographer as well as post-production supervisor, and President of the Chicago Creative Pro User Group. As a veteran of short films, concert films, feature films, and corporate video, Lawson is a member of the Inaugural Board of Directors of Women in Film – Chicago, and the National Academy of Television Arts and Sciences.

Nicole Haddock works on broadcast television series, broadcast promos, corporate pieces (internal communications, fundraisers, corp messaging, etc), and government and military video. Among the shows and promos she has worked on include those for Discovery, Discovery ID, Discovery Education, DIY Network, Discovery Science, the Military Channel/American Heroes Network, National Geographic, and PBS. Haddock is also the director of Post Production for Washington D.C. competition of the 48 Hour Film Project, for which she has to digitize, organize, and output 100 short films in three days.

Luisa Winters is a Master Instructor for Adobe and Apple (ACI and ACT). She teaches for private clients, consults for organizations, and works at several different training centers all over the United States and abroad. As a well-known artist, she often speaks at different conferences on topics ranging from video editing to compositing and web. Among her past accomplishments is, at age 13, being a full-time member of the National Symphony Orchestra in the Dominican Republic. She later attended the legendary Peabody Conservatory in Baltimore, MD. In 1985, Winters had become an editor and motion graphics artist, and since then has been performing in both arts forms full-time. Among the awards Winters has earned are Telly Awards, Videographer Awards, Aegis Awards, and being named to the WEVA Hall of Fame.